I received an eARC of Hunting November by Adriana Mather from NetGalley in exchange for an honest review. This is the sequel to Killing November, so if you haven’t read the first book, check out my review! 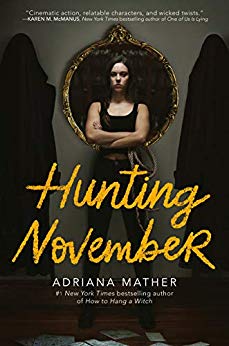 Surviving a few weeks at the world’s most lethal boarding school was one thing. But now comes the real test: Can November Adley find her missing father before her enemies find her? Subterfuge is the name of the game in this thrilling sequel to Killing November, from the #1 New York Times bestselling author of How to Hang a Witch.

After surviving a crash course in espionage at the mysterious Academy Absconditi, November has only one purpose: finding her missing father. Along with fellow student (and heartthrob) Ash, November follows the clues that her father left, embarking on the deadliest treasure hunt of her life. The first clue is in her hometown, where old friends beckon and unexpected enemies lurk around every corner. The second clue is in Europe, where revelations about her family’s history will plunge her into an international web of deception, lies, and intrigue. The third clue is deep in enemy territory, surrounded by the most skilled assassins and master strategists, and where everyone wants her and her father dead. Can one girl with limited training infiltrate a centuries-old organization that is powerful enough to topple empires? November only knows that she’ll do whatever it takes to save her father . . . or die trying.

To start off, we pick right up from the action at the end of Killing November, which was a little disorienting since I haven’t read the book in a year. We immediately jump into action as the characters race off into action, getting the party started. Once the action starts it doesn’t stop for November. It was so intense, especially at the end, that I ended up staying up until 3:00am to finish this story.

I thought it was a great end to Killing November. There was action (duh, they’re like spies), drama, and good endearing moments. I loved the moments between November and Ash specifically cause teenage love is cute, but it also broke up the high risk action scenes. There was a lot I liked about the book, but I want to keep this spoiler free, so I won’t say what it is.

The biggest reasons why I didn’t give this a higher rating though is 1) I was immediately thrown into action with no recap, or explanation, just action. I’m not a big fan of that. 2) There were some moments where certain characters experienced a total personality switch between book 1 to 2. And it remains unexplained through the entire book. 3) I thought the ending was sweet, but it was predictable and felt a little lack luster to me.

I was a little disappointed at the ending actually. We get this intense story with a huge climax and then the ending felt flat after that. I wanted the action to keep going but it just suddenly stops. While I’m happy for November, I wanted the spy action to continue “of screen” and keep the momentum going.

Besides those issues I thought this was an awesome sequel! We get a nice, even end to November’s story and I’m fairly satisfied. This was a solid

If this series sounds interesting, check out Six of Crows by Leigh Bardugo or Four Dead Queens by Astrid Scholte.