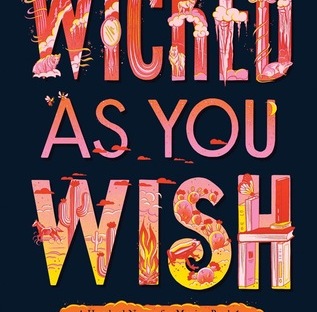 I received an exclusive advance copy of Wicked As You Wish by Rin Chupeco from Fairyloot and I loved it! My review is not in affiliation with Fairyloot and I paid for the box the book came in.

When a hidden prince, a girl with secrets, a ragtag group of unlikely heroes, and a legendary firebird come together…something wicked is going down.

Many years ago, the magical Kingdom of Avalon was left encased in ice when the Snow Queen waged war. Its former citizens are now refugees in a world mostly devoid of magic. Which is why the crown prince and his protectors are stuck in…Arizona.

Prince Alexei, the sole survivor of the Avalon royal family, is hiding in a town so boring, magic doesn’t even work there. Few know his secret identity, but his friend Tala is one of them.

A new hope for their abandoned homeland reignites when a famous creature of legend, the Firebird, appears for the first time in decades. Alex and Tala must unite with a ragtag group of new friends to journey back to Avalon for a showdown that will change the world as they know it.

I was worried, going into this book, that I wasn’t going to like it because a friend of mine didn’t like it and DNFed it really early. But once I started reading it I was immediately sucked in! There is a lot of American history and politics at the start (because this world is set in an alternate universe from ours), but it quickly moves along quickly.

The plot is immaculate. I mean such good plotting and storytelling goes on in this book. Even with all the crazy politics that have to be followed, and there are some crazy politics in this world, it’s so captivating. Especially once we meet the Snow Queen’s minions.

With a diverse cast of characters we’re off to save the world and the kingdom of Avalon from the evil Snow Queen. One thing I really like about this world is that it’s not only a magical version of ours, but incorporates actual fairytales into the history. Snow White, Sleeping Beaty, Little Red Riding Hood, Cinderella, Robin Hood, King Arthur, any and all fairytales you can think of are real people in this world, just not all at the same time.

Our rag tag team is so much fun too and each personality adds another layer to our group’s overall personality, and makes the team that much more interesting. I love a lot of the jokes between these new friends and I kinda miss them. Each has their own weapon and their own skill to help Prince Alex, or just Alex, as well as their own distinct trait/thing that they add and feed off of each other.

Because this is a political fantasy, if you don’t want to read about American politics then I would avoid this title. But, I would recommend looking past the few pages of political history for this epic fantasy if it really bothers you. I personally loved the history and the discussion of America’s current political climate and thought it helped me connect with the story and the characters better.

Overall, this book is really good! I can’t wait to read the next one, especially after that ending! This was a solid

If this book sounds interesting, check out An Ember in the Ashes by Sabaa Tahir or Rebel of the Sands by Alwyn Hamilton.