We are so excited to announce our next blog tour for City of Spells (Into the Crooked Place #2) by Alexandra Christo!

END_OF_DOCUMENT_TOKEN_TO_BE_REPLACED

Be sure to check out the schedule for other amazing posts! The tour starts today, January 5th and goes through January 11th!

END_OF_DOCUMENT_TOKEN_TO_BE_REPLACED

Welcome everyone! Book Terminal Tours is very excited to be kicking off our tour of A Universe of Wishes: A We Need Diverse Books Anthology edited by Dhonielle Clayton! We are featuring some amazing bloggers and bookstagrammers on this tour, so be sure to follow along with the schedule this week!

I’ve attached the list of bloggers and Instagrammers, but please be sure to check back at the official tour schedule for links every day!

END_OF_DOCUMENT_TOKEN_TO_BE_REPLACED

I am so excited to be a part of the blog tour for The Ballad of Ami Miles by Kristy Dallas Alley, hosted by TBR & Beyond Tours! Thanks again for letting me participate, and thank you to Swoon Reads for sending me an ARC of this book for review! Be sure to check out the other posts this week and follow along with the tour schedule!

END_OF_DOCUMENT_TOKEN_TO_BE_REPLACED

Today I am so excited to be able to participate in the book tour for The Bitterwine Oath by Hannah West. Thank you to TBR & Beyond Tours and Holiday House for letting me participate in this tour! You can follow along with the tour schedule here.

I received an advance copy of this title from the publisher in exchange for an honest review. This has not impacted my review and all thoughts and opinions are my own.

END_OF_DOCUMENT_TOKEN_TO_BE_REPLACED

We are so excited to announce our next blog tour for Playing With Fire by April Henry!

END_OF_DOCUMENT_TOKEN_TO_BE_REPLACED

Book Terminal Tours is excited to announce our next blog tour: A Universe of Wishes: A We Need Diverse Books Anthology edited by Dhonielle Clayton!

END_OF_DOCUMENT_TOKEN_TO_BE_REPLACED

Book Terminal Tours is excited to announce our next blog tour: Hold Back the Tide by Melinda Salisbury!

END_OF_DOCUMENT_TOKEN_TO_BE_REPLACED

Thank you so much to TBR & Beyond Tours and HarperTeen for letting me review this book for this tour! This was such a fun book and I can’t wait to read the next one. Be sure to check out the other tour posts – you can find the schedule here.

END_OF_DOCUMENT_TOKEN_TO_BE_REPLACED

Book Terminal Tours is excited to announce our next blog tour for EVERY SINGLE LIE by Rachel Vincent!

END_OF_DOCUMENT_TOKEN_TO_BE_REPLACED

Book Terminal Tours is excited to announce our next blog tour for THE QUANTUM WEIRDNESS OF THE ALMOST KISS by Amy Noelle Parks!

END_OF_DOCUMENT_TOKEN_TO_BE_REPLACED

I am so excited that I got to participate in TBR and Beyond’s tour of Kingdom of Sea and Stone! I loved Crown of Coral and Pearl and was so excited to see that there was a sequel! If you missed the other tour stops, check out the schedule here to see other posts!

END_OF_DOCUMENT_TOKEN_TO_BE_REPLACED

This is a fun announcement I get to make and I’m so excited to be able to share this! As you may, or may not know, Auburn @ What She Will Read, has created a new website for book lovers called The Book Terminal. If you haven’t check it out, you totally should! You can link your blog and other media, join a database to find other bloggers, be featured on the website, trade/buy books, and now – you can participate in blog tours!

Auburn created a section called Book Terminal Tours and a blog tour company! And I’m one of the co-owners/co-hosts for it!

Yes, you heard that right. Auburn and I created a blog tour company! And we just brought on Shreya @ The Baroness of Books to help run it! We are so excited to be working together on this and can’t wait to hopefully work with you all in the future!

For authors, publishers, publicists we are accepting requests and have different types of tours we can host for you. I will link the page with different tours that we offer here. And if you would like to request a tour, you can do so here. Our tours are currently completely free so you will only have to provide the physical or electronic books and any other promotional material you need.

We are currently running a tour for Jaybird by M.A. Foster and sign ups close TOMORROW! I will include the description of the book below. If you would like to participate in this tour, be sure to sign up here! 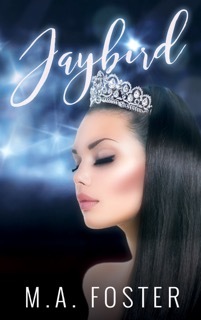 Jaybird was just a nickname my father gave me when I was born.
But after he died, the name took on a life of it’s own.
Jayla King has the world at her fingertips.
A loving family.
Two amazing best friends.
A promising music career.
And the heart of the only boy she’s ever loved. Zach.
But then everything changes.
When news hits the streets that famous rock star and celebrity judge, Marcus King, has suddenly died,
the spotlight shifts to his daughter.
His Jaybird.

*Not recommended for readers under the age of 18 due to language, sexual situations, and mild violence.
Jaybird is a standalone in a series

This book was given to me for review by the publisher and Fantastic Flying Book Club. After hearing all the awful things that FFBC was doing, I formally left the tour. I was supposed to post my review for their blog tour, but instead, I will simply be posting my review for the author and the publisher.

Today, I am reviewing A Wicked Magic by Sasha Laurens, a debut YA paranormal novel about two teenage witches who unwillingly band together to fix the magical mess they’ve made. This title releases on July 28th, so be sure to preorder a copy today!

The Chilling Adventures of Sabrina meets The Craft when modern witches must save teens stolen by an ancient demon in this YA fantasy-thriller debut.

Dan and Liss are witches. The Black Book granted them that power. Harnessing that power feels good, especially when everything in their lives makes them feel powerless.

During a spell gone wrong, Liss’s boyfriend is snatched away by an evil entity and presumed dead. Dan and Liss’s friendship dies that night, too. How can they practice magic after the darkness that they conjured?

Months later, Liss discovers that her boyfriend is alive, trapped underground in the grips of an ancient force. She must save him, and she needs Dan and the power of The Black Book to do so. Dan is quickly sucked back into Liss’s orbit and pushes away her best friend, Alexa. But Alexa has some big secrets she’s hiding and her own unique magical disaster to deal with.

When another teenager disappears, the girls know it’s no coincidence. What greedy magic have they awakened? And what does it want with these teens it has stolen?

Set in the atmospheric wilds of California’s northern coast, Sasha Laurens’s thrilling debut novel is about the complications of friendship, how to take back power, and how to embrace the darkness that lives within us all.

I really enjoyed this book. It was magical and fun with some very interesting characters. The beginning pulled me in quickly, but I found that the middle was pretty slow. I felt like the beginning and end were well thought and executed, but the middle was lagging in terms of action. It began to feel repetitive as the same issues rose up for Dan and Liss that they had to work through.

Alexa’s story on the other hand got my attention. I wanted to read more about her and what was going on with Lorelai’s investigation. The whole first half of the book was focused on Dan and Liss’ situation with occasional sections on Alexa – but in the second half we get to see her a lot more and that’s when things get interesting.

Focusing on the plot, this book was so good. The actual events that go on and what these girls have to face was insane and super creepy. I wish I had read this book for Halloween with the amount of creepy, eerie things that happen. I also was a bit upset about who Alexa ended up with, because I was kind of rooting for someone else. On the other hand, she ends up with a really sweet girl and seems really happy.

For the characters, we see a lot of growth between the three, especially for Liss in my opinion. Honestly, I didn’t like Liss’ character at all in the beginning, but after finding out more about her home situation and her motivation for things, I just feel sorry for her. The changes she goes through made her into a much healthier person and I loved seeing her growth. Dan also goes through a much needed change and comes out a healthier, hopefully happier, person.

One thing that I think the author was trying to make cannon was Dan’s sexuality. We know Liss is straight (or at least very interested in her boyfriend Johnny) and Alexa is gay, but we never learn about Dan. Not that it’s important, but I can’t help but wonder where the author was going for her. See, in the book, Dan comes across as ace (asexual) or somewhere along the ace spectrum. But it’s never confirmed, denied, or really discussed. Part of me wants an answer, but it doesn’t really affect the story much whether or not she is. I’m just curious, I guess.

Overall, this book was written beautifully and it dives into things like self harm, depression, abusive home life, and other important conversations like that. These issues are discussed and handled carefully and I appreciate the work the author put in to represent these topics well. Though the middle was really slow for my taste, I think this book was still awesome. I loved learning about how magic worked in this world and pairing it with real teenage problems.

I think a lot of people will not only enjoy this book, but learn that things aren’t always what they seem. So, I’m giving this a