When I saw the announcement for a new Tycho book, set four years after the events in A Vow So Bold and Deadly, I literally screamed. I love the Cursebreaker series and couldn’t wait to return to that world and revisit some of these characters!

If you haven’t read the original trilogy, you’re definitely going to want to. If you haven’t check out my spoiler free review of the third book, A Vow So Bold and Deadly you should definitely check it out!

Thank you to Bloomsbury YA for sending me an advance copy for review! This is a spoiler free review and all thoughts and feelings are my own. 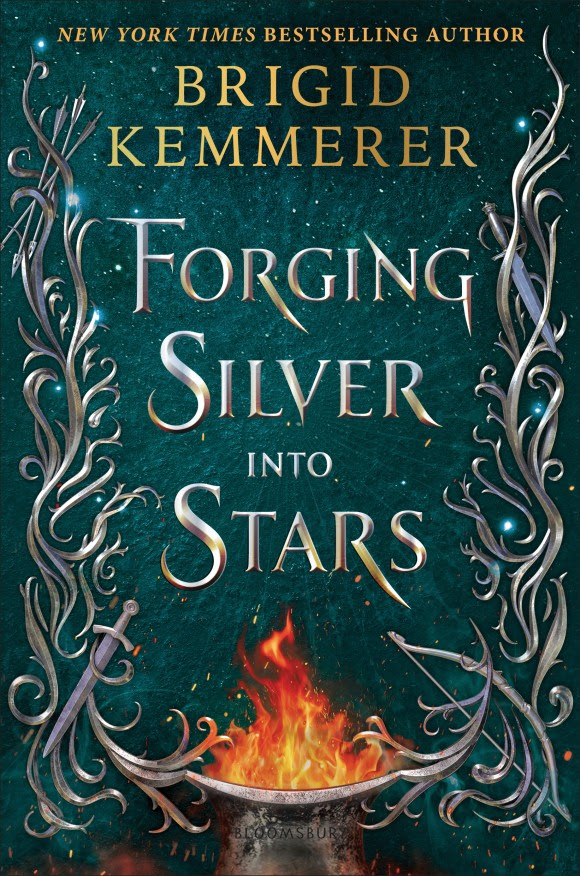 Magic has been banished in the land of Syhl Shallow for as long as best friends Jax and Callyn can remember. They once loved the stories of the powerful magesmiths and mythical scravers who could conjure fire or control ice, but now they’ve learned that magic only leads to danger: magic is what killed Callyn’s parents, leaving her alone to raise her younger sister. Magic never helped Jax, whose leg was crushed in an accident that his father has been punishing him for ever since. Magic won’t save either of them when the tax collector comes calling, threatening to take their homes if they can’t pay what they owe.

Meanwhile, Jax and Callyn are astonished to learn magic has returned to Syhl Shallow — in the form of a magesmith who’s now married to their queen. Now, the people of Syhl Shallow are expected to allow dangerous magic in their midst, and no one is happy about it.

When a stranger rides into town offering Jax and Callyn silver in exchange for holding secret messages for an anti-magic faction, the choice is obvious — even if it means they may be aiding in a plot to destroy their new king. It’s a risk they’re both willing to take. That is, until another visitor arrives: handsome Lord Tycho, the King’s Courier, the man who’s been tasked with discovering who’s conspiring against the throne.

Suddenly, Jax and Callyn find themselves embroiled in a world of shifting alliances, dangerous flirtations, and ancient magic . . . where even the deepest loyalties will be tested.

First off – we get to see Grey and Lia Mara’s baby, now a full toddler in this book! Princess Sinna is the star of this entire book, she’s such a cutie. I wish we got to see more of her, but alas, this book is Tycho’s book and wow he has a story to tell.

In this book we get to meet two new characters: Jax and Callyn. Best friends and neighbors, they grew up together and banded together to help each other after Jax lost his foot and, years later, Callyn lost her father. With no parents, Callyn is responsible for the bakery her parents owned and her twelve year old sister Nora. While Jax handles running the forge his father owns while his father is drowning in ale at the local pub.

Tycho is now the King’s Courier, aka the private messenger between kings, and he’s happy to have the alone time. Until his horse ends up losing a shoe and he meets Jax and Callyn.

The chemistry between Tycho and his love interest is palpable from the get go. It’s so clear the two of them fancy each other and are just too shy to say anything, which is so sweet. Like, every interaction between them had my own heart fluttering as they flirted with each other and developed a friendship and then … more.

One of my favorite things in this series is the disability representation. While Harper’s disability was from birth, Jax had an accident when he was a child and lost his foot due to it. But, Jax doesn’t let that stop him, for the most part, and continues to live his life to the fullest, even if it means changing his plans for the future. It’s so clear he’s had to remain level headed and responsible while his father does whatever pleases him.

Meanwhile, Callyn is such a strong character, I loved her so much. The adversity she faced in losing both of her parents and having to raise her younger sister, while running a business, is no easy feat but she does it with pride. And even when her and Jax are threatened with losing everything (don’t we love taxes), she never panics. She sets a plan for herself and acts.

And of course, Callyn’s sister, Nora. She’s another one of my favorite characters. As the oldest sister, the back and forth bantering that Callyn and Nora have is perfection. I can relate to a nosy younger sister who not only wants my attention, but wants to emulate me. I had two of them. Her unawareness to awkward situations, and therefore making them even more awkward, is also perfection.

This entire book just makes me so happy and I loved seeing new and old characters. The ending makes me want to pick up book 2 immediately! If you loved The Cursebreaker series or are just a fan of Brigid in general, you are going to love this book. And if you’ve never read either, I would highly recommend the series if you love fantasy, retellings, morally grey love interests, and just well written books.