When I first started this trilogy, it was after winning an ARC of The Empire of Gold and I realized I screwed up. Because I had not read either of the first two books and even though they sounded really good, I didn’t intend to pick them up for a while. But after reading, and down right loving, The City of Brass, I was so glad that giveaway gave me the push to read this series, because it’s one of my absolute favorites.

If you haven’t read The City of Brass or The Kingdom of Copper, then be sure to check out my spoiler free reviews of both of them!

This is a spoiler free review and all thoughts and feelings are my own. Enjoy! 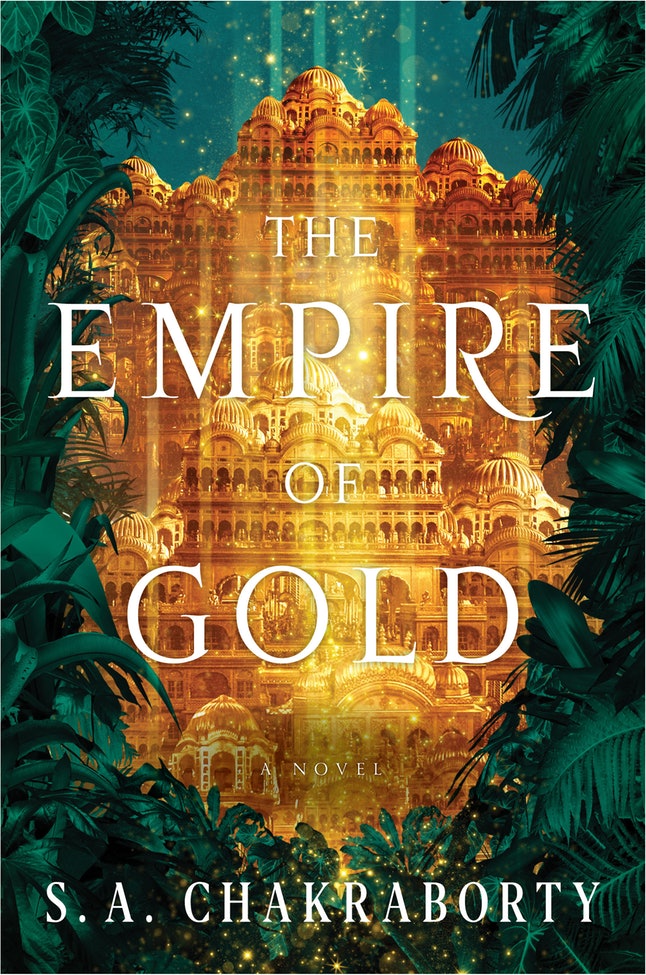 The final chapter in the Daevabad Trilogy, in which a con-woman and an idealistic djinn prince join forces to save a magical kingdom from a devastating civil war.

After a brutal conquest stripped the city of its magic, Nahid leader Banu Manizheh and her resurrected commander, Dara, must try to repair their fraying alliance and stabilize a fractious, warring people.

But the bloodletting and loss of his beloved Nahri have unleashed the worst demons of Dara’s dark past. To vanquish them, he must face some ugly truths about his history and put himself at the mercy of those he once considered enemies.

Having narrowly escaped their murderous families and Daevabad’s deadly politics, Nahri and Ali, now safe in Cairo, face difficult choices of their own. While Nahri finds peace in the old rhythms and familiar comforts of her human home, she is haunted by the knowledge that the loved ones she left behind and the people who considered her a savior are at the mercy of a new tyrant. Ali, too, cannot help but look back, and is determined to return to rescue his city and the family that remains. Seeking support in his mother’s homeland, he discovers that his connection to the marid goes far deeper than expected and threatens not only his relationship with Nahri, but his very faith.

As peace grows more elusive and old players return, Nahri, Ali, and Dara come to understand that in order to remake the world, they may need to fight those they once loved . . . and take a stand for those they once hurt.

After finishing Kingdom of Copper, I was quick to start Empire of Gold because – oh my god – that ending. Everything was falling apart around our characters with no hope in sight and I could not deal with that! It didn’t take long before I had to put the book down because everything felt so hopeless.

Ali had been a favorite character for me since the beginning, but this book solidified that. His interactions with Nahri had me almost screaming at the book for them to just confess their love to each other! I especially loved their moments in Cairo as they figure out what’s going to happen next. I was also so glad Nahri got to reconnect with the doctor again and use some of her newfound knowledge of human/shafit medicine in Cairo.

And of course we have Dara. From the start of this book I was absolutely furious with him and his choices. I felt just as betrayed as Nahri did when he made the decision to support Manizeh and basically casted her off. But as the story progresses, and we see his reasoning and the consequences of his decisions, we see a true change in Dara for the better. It honestly felt amazing and awful to see him face the truth of his actions and suffer. Like on one hand I’m happy he learned his lesson and realized what he had done, but on the other hand the consequences he faced were so intense and inhuman I couldn’t bear to read his POVs sometimes. It was so cruel.

This entire book gave me so much stress I had to stop reading it several times. I wanted to finish the series and the story so bad, but the thought of actually finishing made me want to cry – so it took me about a month to read this. Do I regret it? No. This book was one meant to be savored. I took my sweet time reading and when I was done. Speechless.

This book was such a journey for me I’m actually mourning it. I think I’ve said this every review I’ve ever written, but if you haven’t read this book yet, you absolutely need to! One of the best political, historical fantasies I’ve ever read. Literally amazing!