Hello again and welcome to another blog post! Today I am reviewing A Court of Honey and Ash by Shannon Mayer and Kelly St Clare, which was recommended to me by my bookselling friends Kaitlin and Emma. 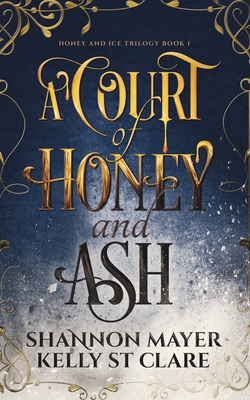 Orphaned. Trained to fight. Raised to fear the power of Underhill. Secretly in love with a man who doesn’t want me.

I’m still just Alli, aka the half-human orphan fae, but my life is looking up for the first time. It only took me my whole 24 years.

But when Underhill—the ancestral home of the fae—shatters, making it impossible for any fae to enter, I’m the only one who knows who did it.

A secret that will be the death of me if I do nothing.

A brutal madness spreads through the fae as they lose their connection to Underhill, and to save my people, my only choice is to leave all I have fought for and go on the run.

Unless I figure out how the hell magic that has existed since the dawn of time was destroyed with a single touch, well, an entire life spent fighting to prove myself isn’t going to mean anything at all.

I must find the answer to the riddle of Underhill’s shattering.

Hunted by the very man I loved once upon a time.

For starters, I was recommended this book by people who hadn’t read it yet, so I went into it sort of blind. The first chapter sucked me in – we’re in a world where humans and ethereal creatures live together in somewhat harmony. Our main character is a bastard child, born of a human and the Seelie King. And while she has some powers, her bastard status has left her basically an orphan, so she does what any orphan can do: she sets out to train at Underhill, until it somehow shatters. Now, the premise of the book sounded really cool and when you look at the world building and all of the different connecting parts, you would think this would be an amazing book, but I had some problems with it.

For starters, while the world is described really well and we get an interesting plot line, the characters are horrendously annoying. Alli says the same thing every time she seems the same people. For example, Hyacinth, her best friend. Every time Alli is with her, Cinth gets the same descriptors: gigantic boobs, very large, curvy body, boobs and ash shaking/jiggling any time she moves, always compared to Alli’s very thin frame. It was exhausting. And as a plus size girl with skinny friends, if my friends always described me or thought of me like that when they saw me, even as a compliment, I wouldn’t want to hang out around them anymore. And don’t get me started on her crush.

And looking past the way characters are described, the writing isn’t much better. The first few chapters really pulled me in and then after that the book fell flat. Literally. The writing became very dull and repetitive, cycling between the same actions/scenes in different locations that are sometimes described well, until the ending. It was like the beginning and end were really polished but the middle was just filler with no idea what to do in the meantime.

Honestly, I can think of more things I didn’t like than I liked, but the biggest thing I didn’t like was the romance. Alli has a crush on a guy she knew when she was a child. Someone she hasn’t seen in 8 years. But the way she describes hating him shows literally no way she can actually like him. And it’s not a “I hate that I love you” kind of thing, it’s very clearly, “I hate him so much, don’t come near me or I’ll kill you” kind of vibe. And this man shows no signs of affection for this girl at all. Yeah, he was nice to her as a child, before she left, but since coming back he’s just plain rude and awful. You would have no idea that there’s supposed to be a romance between them.

Overall, there was a lot about this book I didn’t like. And yet, the plot and the overall storyline are really interesting. I probably wouldn’t buy another physical copy of the second book, I’d most likely just get it on kindle or something, but clearly I didn’t hate it or I wouldn’t want to read more. Just know that going in there’s a lot of issues with the writing and that most of these issues stem from it.