Hi everyone! I’m very excited to share my spoiler free review of City of Shattered Light for the TBR & Beyond tour! This book quickly hooked me in and I can safely say that there were so many twists that I couldn’t see coming, it was so well done. Thank you to TBR & Beyond Tours for letting me participate and share my thoughts! Be sure to check out the tour schedule to see all of the amazing posts on this tour!

I received an e-ARC from TBR & Beyond Tours and Flux Books through NetGalley in exchange for an honest review. This is an honest, spoiler free review and all thoughts and feelings are my own. 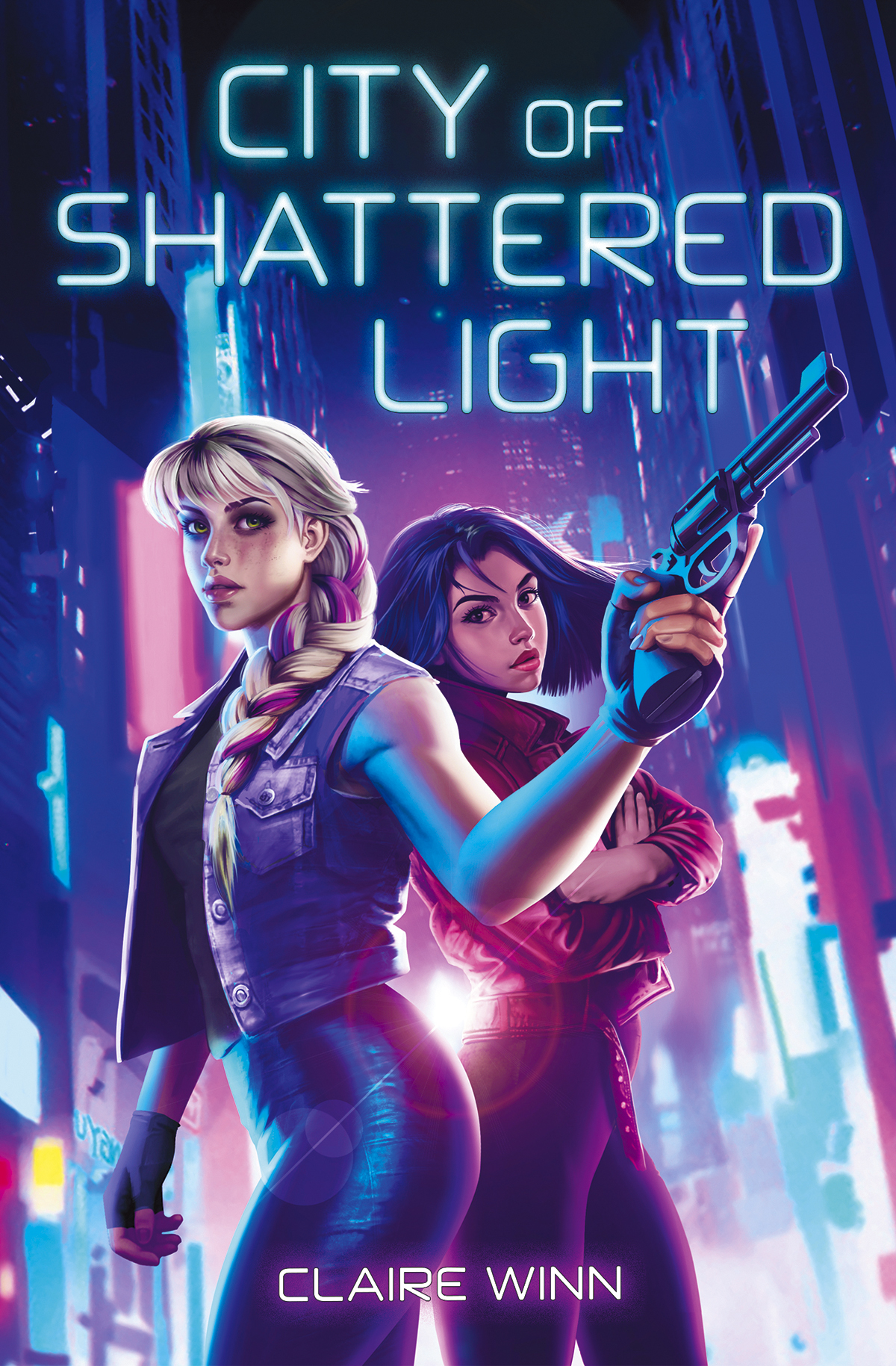 As darkness closes in on the city of shattered light, an heiress and an outlaw must decide whether to fend for themselves or fight for each other.

As heiress to a powerful tech empire, seventeen-year-old Asa Almeida strives to prove she’s more than her manipulative father’s shadow. But when he uploads her rebellious sister’s mind to an experimental brain, Asa will do anything to save her sister from reprogramming—including fleeing her predetermined future with her sister’s digitized mind in tow. With a bounty on her head and a rogue A.I. hunting her, Asa’s getaway ship crash-lands in the worst possible place: the neon-drenched outlaw paradise, Requiem.

Gun-slinging smuggler Riven Hawthorne is determined to claw her way up Requiem’s underworld hierarchy. A runaway rich girl is exactly the bounty Riven needs—until a nasty computer virus spreads in Asa’s wake, causing a citywide blackout and tech quarantine. To get the payout for Asa and save Requiem from the monster in its circuits, Riven must team up with her captive.

Riven breaks skulls the way Asa breaks circuits, but their opponent is unlike anything they’ve ever seen. The A.I. exploits the girls’ darkest memories and deepest secrets, threatening to shatter the fragile alliance they’re both depending on. As one of Requiem’s 154-hour nights grows darker, the girls must decide whether to fend for themselves or fight for each other before Riven’s city and Asa’s sister are snuffed out forever.

Starting off, the opening for this book was really well done. We have a heist gone wrong where one of our main characters, Riven, encounters a rival thief, causing them to lose the item they were sent to obtain, and leaving them in a world of trouble. Meanwhile, Asa is set to inherit her father’s empire until his experiment leads to uploading her sister’s brain into a new one and preparing to download it for his use. In an attempt to save her sister, Asa must leave her sheltered home and make her way to Earth, before it’s too late.

I have to say, Asa’s home life is horrible. This is a clear example of parental abuse: Asa’s locked in her room for days at a time, communication is cut off from her own sister, she fears failure because failure equals punishment. She’s never left her home except to work in her father’s lab or for demonstrating new tech they’ve developed. And of course to Asa, this is her father’s way of protecting her and her sister. It made me so mad to see these girls treated like this and forced to live a life in isolation.

Once Asa makes it out of her home though, we’re met with a futuristic world set off Earth. Asa finds herself on Requiem, a colonized moon somewhere in the Milky Way. Once Asa finds herself in Requiem, it’s so clear she has no idea what she’s doing and where she’s going. Being pushed around and stolen from one person to another for the high bounty on her head, I was chuckling at how she was being passed around like a hot potato.

This book had a lot of humor and sass in it, which I loved. Sci-fi books that are too serious just leave me wondering why everyone lacks a sense of humor or a personality. But we gets lots of comedic relief and funny moments between these characters! Which definitely made me fly through this book.

Personally, I loved the plot and the plot progression of this book. Asa’s motivation being to save her sister and only friend. Riven’s to save herself and her team from certain death and the loss of several organs. Teaming up together to take down Asa’s father and the evil scientist, Gabriel Almeida, while evading others who mean to take Asa down.

One thing that I wasn’t a fan of though was how Asa and Riven’s relationship develops. For the majority of the book, Asa is with Ty and is falling for him, while glancing at Riven and noting how attractive she was. I’m not a fan of the instant love trope, and I felt like Asa and Riven fit in that. Even though Asa and Riven don’t end up together until the end, this book is marketed as having a sapphic relationship, and I definitely wanted to see more of their relationship development over Asa and Ty. They go through the whole book pining for each other while Asa is with Ty, only to finally snap into place together at the last minute. I would much rather keep the pining and enemies to lovers aspect of the book, but get rid of Asa’s relationship with Ty. Or at least shorten it.

Overall, I loved the plot and the idea behind this story! And while I’m not a fan of the relationship progression timeline, I did love the pining between Asa and Riven. I read this book so quickly I couldn’t put it down. Definitely a new favorite sci-fi for me!

Claire Winn spends her time immersed in other worlds—through LARP, video games, books, nerd conventions, and her own stories. Since graduating from Northwestern University, she’s worked as a legal writer and freelance editor. Aside from writing, she builds cosplay props and armor, tears up dance floors, and battles with boffer swords. City of Shattered Light is her first novel.