All of my friends are hopping on the NA/Adult Fantasy Romance train (aka fantasy with a sprinkle of spice/smut) and Gild was one my friends could not stop talking about. Two of my friends work at Barnes & Noble (which is half the reason I’ve been buying so many books) and they shoved this book into my hands and told me to read it. So, I read it. And I really liked it. So much that I went back a few days later to pick up the sequel! 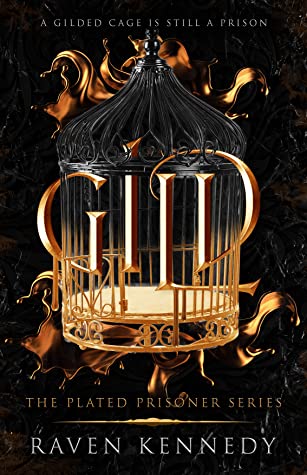 The fae abandoned this world to us. And the ones with power rule.

Gold floors, gold walls, gold furniture, gold clothes. In Highbell, in the castle built into the frozen mountains, everything is made of gold.

King Midas rescued me. Dug me out of the slums and placed me on a pedestal. I’m called his precious. His favored. I’m the woman he Gold-Touched to show everyone that I belong to him. To show how powerful he is. He gave me protection, and I gave him my heart. And even though I don’t leave the confines of the palace, I’m safe.

Until war comes to the kingdom and a deal is struck.

Suddenly, my trust is broken. My love is challenged. And I realize that everything I thought I knew about Midas might be wrong.

Because these bars I’m kept in, no matter how gilded, are still just a cage. But the monsters on the other side might make me wish I’d never left.

Author’s Note: This is a fantasy romance m/f story. There will be monarchs and magic and fae and steam and violence and all the feels. This book contains explicit content and mature language not intended for anyone under 18 years of age. This is book one of three in the series, so that means it won’t be tied up in a bow at the end. In fact, the bow is probably going to be tossed right off a cliff. But it’ll be worth the fall.

Now, what I’m sure everyone wants to know, where does this book lie on the spicy scale? Well, that depends on what you deem as spicy. There are graphic scenes and lewd language used in this book, so if you’re someone who cannot tolerate any spice in your books past kissing scenes and fade to black, this is not a book for you. But, if you’re someone who reads a lot of smut and has read some very out there, wild stuff, this is pretty tame. For me, this was 2.5 // 5 stars for spice. So not tame, but not insane spice. The half star is for the orgy scene I wasn’t prepared for lol

In terms of plot, there’s workings of one. I like the world that it’s set in has the fae that used to live alongside humans, now gone, and the remaining magic that exists left behind to give people like kings power. But in terms of the actual plot of this book, there’s not much of one. The whole first half of the book is more day to day life and then in the second half, we finally get some plot! And that’s when this book went from being okay to being good.

Overall, I like the main character, though she spends a lot of the book pining after Midas and basically obsessing over him. Like yes, I get it, she’s his favorite, but does that mean her whole personality has to be about being Midas’ favorite? I sure hope not. There are also two other characters in this book that I really like, but I won’t go into it to avoid spoilers.

Anyways – this book was really interesting and set down some interesting points for Glint, which I’m very excited to read. I hope I can get to Glint and Gleam soon, because that ending left me slack jawed and I need to know what happens next!