Vampires are back and I love the direction Sonia took this story. From the first chapter, I was invested in forever 16 y/o Holly who has to work at Taco Bell because she decided to be turned into a vampire and can’t manage to get a job anywhere else.

I loved the story, but for the love of God, publishers PLEASE allow the pdfs to be sent to kindle! I had to read this on my laptop, which isn’t the worst thing in the world, but it was seriously annoying. I would have much rather read this on my iPad or phone where I can at least take it around with me, instead of having to remain somewhat stationary.

Thank you to Page Street Kids and NetGalley for providing me with an e-ARC of this book for review! This is a spoiler free, honest review and all thoughts and feelings are my own. 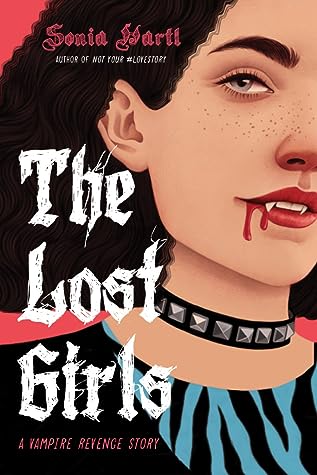 Holly Liddell has been stuck with crimped hair since 1987 when she agreed to let her boyfriend, Elton, turn her into a vampire. But when he ditches her at a gas station a few decades into their eternity together, she realizes that being young forever actually means working graveyard shifts at Taco Bell, sleeping in seedy motels, and being supernaturally compelled to follow your ex from town to town—at least until Holly meets Elton’s other exes.

It seems that Holly isn’t the only girl Elton seduced into this wretched existence. He turned Ida in 1921, then Rose in 1954, and he abandoned them both before Holly was even born. Now Rose and Ida want to kill him before he can trick another girl into eternal adolescence, and they’ll need Holly’s help to do it. And once Holly starts falling for Elton’s vulnerable new conquest, Parker, she’ll do anything to save her.

To kill Elton for good, Holly and her friends will have to dig up their pasts, rob a bank, and reconcile with the people they’ve hurt in their search for eternal love. And to win the girl, Holly will have to convince Parker that she’s more than just Elton’s crazy ex—even though she is trying to kill him.

Holly is an excellent MC! I’m just going to start with that, because while this book felt too long and yet too short at the same time, Holly kept me entertained through it all. For starters, working at Taco Bell, which I found really funny for some reason. Like the thought of a vampire working at a fast food restaurant, hating her life and her decision, basically sulking, is absolutely hilarious. And then we find out her ex-boyfriend is the one who turned her and lied, saying she was the only one, when there were two other girls.

And, and, to top things off, he has another girl set in sight. So the three of them decide to kill him.

I love this idea.

The book started off super strong. Like I was so invested in this story, but halfway through, it started to fall flat. Some aspects of the book felt rushed, like the romance between Parker and Holly, while other parts felt really dragged out, like Holly and her best friend reconciling.

This book was such a conundrum. At some points, I wanted more to the story and wished it was longer. And then I would wish for certain parts to be cut down because it was just dragging on. One thing I wanted to see more of was the relationship development between Parker and Holly. The start of their relationship felt a little rushed and then as it was developing, there wasn’t enough interaction between the two of them to really justify them falling in love.

Elton was such a great antagonist, because I wanted to reach through the screen and throat punch him the entire book. Though I wished we had something other than killing Elton for the motivation for this book. At only 250 pages, there’s not a lot of plot to fill up the book, so we’re left with a minimal plot with some side plots that sometimes add substance and sometimes make the book drag on. The few times we see Elton, the whole reason for this book, he’s being a complete jerk with a one sided personality. I wanted to see more of those original memories with Elton: him as a sweet boyfriend, convincing girls to end their mortal lives for him, and how he was pre-immortality. But we don’t get much from him, other than he’s a manipulative, abusive jerk.

While there are some things I wasn’t a fan of, ultimately, I liked this book! Holly was such an interesting MC and I loved seeing the aftermath of the change and what life is like during immortality. I’m sure most 16 year olds who dream of being immortal don’t think about the life long Taco Bell career because they can’t get a job anywhere else. Or the logistics of finding a place to live with no money. The premise of this book was so cool and I was really invested in the story!

Overall, I loved the lore, the background/set up for this book, and Holly as an MC in general. While there were some things I wasn’t a fan of, overall, I really liked this book and think it’s a great vampire novel! Though it’s more cynical, this book has some great humor and important lessons every teenager dreaming of becoming immortal should think about.

One thought on “Review: The Lost Girls (A Vampire Revenge Story)”