This is a spoiler free, honest review and all thoughts and feelings are my own. I’m going to do my best to be coherent, but honestly, this book was just too damn good! 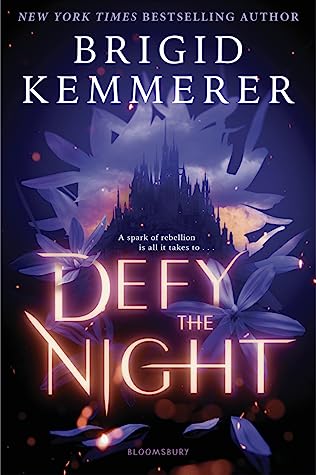 The kingdom of Kandala is on the brink of disaster. Rifts between sectors have only worsened since a sickness began ravaging the land, and within the Royal Palace, the king holds a tenuous peace with a ruthless hand.

King Harristan was thrust into power after his parents’ shocking assassination, leaving the younger Prince Corrick to take on the brutal role of the King’s Justice. The brothers have learned to react mercilessly to any sign of rebellion–it’s the only way to maintain order when the sickness can strike anywhere, and the only known cure, an elixir made from delicate Moonflower petals, is severely limited.

Out in the Wilds, apothecary apprentice Tessa Cade is tired of seeing her neighbors die, their suffering ignored by the unyielding royals. Every night, she and her best friend Wes risk their lives to steal Moonflower petals and distribute the elixir to those who need it most–but it’s still not enough.

As rumors spread that the cure no longer works and sparks of rebellion begin to flare, a particularly cruel act from the King’s Justice makes Tessa desperate enough to try the impossible: sneaking into the palace. But what she finds upon her arrival makes her wonder if it’s even possible to fix Kandala without destroying it first.

Set in a richly imaginative world with striking similarities to our own, Brigid Kemmerer’s captivating new series is about those with power and those without . . . and what happens when someone is brave enough to imagine a new future.

I took a few days to calm down before writing this post and already my heart rate is through the roof! Brigid just knows how to write amazing books with characters I absolutely love, set in worlds I can feel and see so realistically. If you haven’t read any of Brigid’s books before, put this review down, head over to your local bookstore (or online if that’s closer), and order some copies – NOW! There hasn’t been a single book I’ve read by Brigid that I haven’t loved – and this one is no exception.

Starting us off, we have Tessa and Wes. The two masked outlaws stealing moonflower in order to create medicine for a plague there is no cure to. This medicine works to prevent whatever illness is spreading and reduce the likelihood someone will die. It’s also heavily controlled and monitored for dosages, so if you’re wealthy, you can get as much as you want, but if you’re poor, you get what they give you. Tessa and Wes are fighting back against that, stealing the petals and brewing weaker doses to give to the people who need them.

Then, we have Prince Corrick. After witnessing his parent’s assassination, he and his brother, Harristan, must put up the perception of cruelty and indifference in order to remain strong in front of their advisors and their kingdom. While their parents were beloved, the young king and his King’s Justice are certainly not. The constant personal and political struggle of being the tough guy has not only ruined their reputation, but if they don’t keep up the act, could risk their lives.

Now, this book is not a pandemic book, as according to Brigid, it was written in 2019 before any of this mess even happened. And yet, a lot of its messages still stand true today. Unlike our pandemic though, this one is random in how it spreads. It does not discriminate against young vs old. Wealthy vs poor. One person in the house could die from it, while the other remain unaffected. It’s definitely a strange disease that doesn’t really make much sense. Except that the moonflower petal elixir helps prevent the sickness and reduce its deadliness.

Personally, I loved the set up for this book! Tessa and Wes are so freaking adorable together, that I couldn’t even comprehend anything else they were doing. Their banter was so cute and sassy and silly. Every moment with them made my heart sing with joy. Meanwhile, moments with Prince Corrick made me really sad. It’s clear he feels he has to keep up his rouse in order to save his life and his brothers, but he’s not a cruel person. He just has to be one sometimes.

There were some moments with Corrick though that I was screaming in frustration. How he was blind to his ways out and had to keep up this cruel mask. One of the heads of the provinces (?) in Kandala, Allisander, is someone who I want to throat punch. Not only does he, and one other person, control the entire supply of Moonflower, but that means he feels entitled to whatever he wants. And I was raging every time he got what he wanted! Allisander’s meanness and cruelty were mind boggling and Corricks willingness to just give him whatever he wants, because he controls the supply of medicine, is horrifying. Every interaction with this man made me want to punt him across a field – I couldn’t stand him!

On the other hand, Quint, a friend to Corrick, is wonderful. He’s really talkative, and very funny, and it’s clear that he and Corrick have a really great friendship. I was a little suspicious of him at first, just because I wasn’t sure who he truly was, but by the end, Quint is a favorite! Especially when he interacts with Tessa. He’s like both of their lifelines in the palace and it just makes me feel all warm and fuzzy inside!

Tessa was also so fun to read! I loved all of her chapters, even when I was banging my head on the wall during certain scenes/moments. I love her personality and her energy – she’s just an overall kind, caring person. Even when she’s contemplating killing Corrick. I can see how her parent’s death shaped her perception of things. She just wants to do what’s right and best for everyone, even if it means potentially sacrificing herself. I will say though, every moment with Tessa and Harristan had me cracking up! I could imagine myself doing the same thing, stammering over myself, unsure what the hell is going on. The interactions in this entire book is just pure gold.

And with these golden interactions, it makes me love the characters in this book so much! Even Harristan, who we only see bits and pieces of, is an interesting character, and one I hope we get to learn more about. Except Allisander. That guy can fall off a cliff.

By the end of this book, I was hungry for more. I need more Tessa, I need more Wes, I need more Corrick, I need more Quint! I need the next book in this series, like yesterday!!! This book has enemies to lovers, sassy best friends, hard on the outside/soft only for you on the inside – what more can I say to convince you!? Oh yeah – it has STRONG Robin Hood vibes, but it’s not a Robin Hood retelling. Need I say more?

This book comes out on September 14, 2021, so be sure to pre-order your copy so we can all fawn over Wes and Corrick together! You will not regret it!!

If you want more Brigid Kemmerer, check out her other books! And if you can’t wait for September, check out some of my other reviews for more fantasy recommendations!

If you’ve read the Cursebreaker series, you can also check out my rambling review of A Vow So Bold and Deadly!

5 thoughts on “Review: Defy the Night”