Honestly, I requested this book solely based on the cover. The colors, the two girls staring at each other lovingly, the lightening – everything was coming together and screaming “READ ME!!!”

And what I got was a complex story about two girls trying to survive the end of the world and it was so freaking good!

I received an e-ARC from Penguin Teen through NetGalley in exchange for an honest review. This is a spoiler free, honest review and all thoughts and feelings are my own. 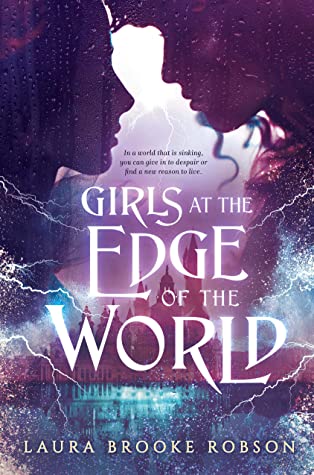 Set in a world on the edge of an apocryphal flood, this heart-stoppingly romantic fantasy debut is perfect for fans of Rachel Hartman and Rae Carson.

In a world bound for an epic flood, only a chosen few are guaranteed safe passage into the new world once the waters recede. The Kostrovian royal court will be saved, of course, along with their guards. But the fate of the court’s Royal Flyers, a lauded fleet of aerial silk performers, is less certain. Hell-bent on survival, Principal Flyer, Natasha Koskinen, will do anything to save the Flyers, who are the only family she’s ever known. Even if “anything” means molding herself into the type of girl who could be courted by Prince Nikolai. But unbeknownst to Natasha, her newest recruit, Ella Neves, is driven less by her desire to survive the floods than her thirst for revenge. And Ella’s mission could put everything Natasha has worked for in peril.

As the oceans rise, so too does an undeniable spark between the two flyers. With the end of the world looming, and dark secrets about the Kostrovian court coming to light, Ella and Natasha can either give in to despair . . . or find a new reason to live.

Now, to be completely honest, there were some slow patches in this book. The pacing alternated between fast, plot driven moments that lead to a lot of action and character development and then slowed down and coasted on more minor moments. The slow moments weren’t bad, but if you’re looking for a story that keeps a fast pace and pushes you through to the end, you might struggle with this book. I appreciated the slower moments – it gave us time to get to know our main characters, Ella and Natasha, as well as their friends and fellow flyers, but it is a noticeable slowness.

The thing that really struck my interest were the characters. Ella is seeking revenge for her girlfriend, an exiled princess, who was murdered by her brother. Natasha is trying to find a way to survive the end of the world, especially since her mother didn’t. Ella doesn’t mind if she dies and Natasha is doing everything she can to beat the odds. Both girls have completely different motivations and yet, somehow, their stories intertwine and it is amazing.

The world building is also fantastic. I loved the political, religious, and cultural background we get. Everything is so well thought out and made the world feel so real as I was reading it. I appreciated the commentary on religion – that just because one religion says its the truth, doesn’t mean that others don’t have their own truth in it too. We also see the effects of a closeness between church and state, which can obviously get very messy.

And this book is addicting. I was so wrapped up in Natasha and Ella’s stories that I didn’t even consider other possible endings. Like I was actually shocked by the ending and I’m still reeling from it. Natasha is determined to save the flyers, silk dancers who lift themselves high into the sky, and will do anything to save them from the Floods. Even if it means courting and marrying the Prince, Nikolai. One thing I wished we got more of were fleshed out scenes with Nikolai. For the most part, he’s kind of this unattainable character, one we rarely see and hear from. And the moments we do see him are short and to the point. I wished we could have gotten to know his character more, especially since he was the “love interest” for Natasha for most of the book.

Meanwhile, with Ella, watching her try to formulate her revenge was intense. Grief stricken by the loss of her girlfriend, Ella has no one, except for her girlfriend’s aunt. And she’s only really there to help Ella exact her revenge so she can take the throne. But when Ella joins the flyers and starts to work towards her plan, it’s clear that its way harder than they both thought and what if Ella doesn’t want to die anymore? Watching her go through that emotional journey was so … satisfying. It just felt like Ella really found herself and accepted that just because she was devastated by this loss didn’t mean she had to sacrifice her life for it, or that she couldn’t find love elsewhere.

I think my favorite thing about this book, besides the constant reminder of the apocalypse everyone is about to face, are the relationships. Watching Ella become friends with the flyers and find her place with them. Natasha fighting for her friends with everything she has and being willing to give up herself to Nikolai to save them. Natasha and Ella becoming friends and then maybe something more. The strength of these relationships really carried the story for me, even during times of slowness in the plot.

And even in slow moments, the plot line is still strong. There really wasn’t much in this story that I didn’t like and by the end, I was so upset there was nothing left to read. No more pages to tell me what happens next. I kept hitting my screen, trying to get it to turn the page, before I realized the book was finished. It was so sad. Overall, if you like sapphic romances, end of the world themes, some religious/political commentary, or stories about pure survival – this is a book you need to pick up!

If this sounds interesting, be sure to check out The Electric Kingdom by David Arnold. You can check out my full, spoiler free review here.

5 thoughts on “Review: Girls at the Edge of the World”