My friend Alexa over at Writing the Universe somehow managed to get an extra ARC of Better Together from Wednesday Books and she was kind enough to give me her extra copy (thank you!). We ended up somewhat buddy reading this book together and um… it was interesting. Definitely interesting.

I’m going to link her review as well, since she has some strong opinions about this book too. 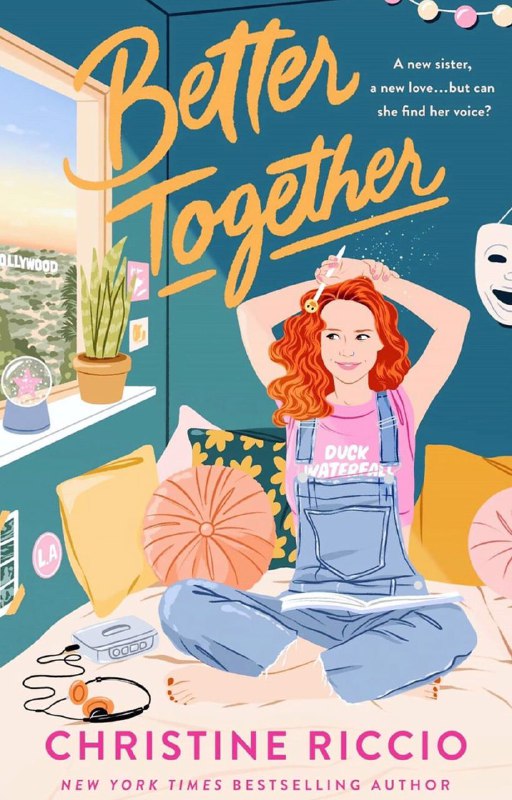 Jamie’s an aspiring standup comic in Los Angeles with a growing case of stage anxiety.

They’ve both signed up for the same session at an off the grid Re-Discover Yourself Retreat in Colorado. When they run into each other, their worlds turn upside down.

Jamie and Siri are sisters, torn apart at a young age by their parent’s volatile divorce. They’ve grown up living completely separate lives: Jamie with their Dad and Siri with their Mom. Now, reunited after over a decade apart, they hatch a plot to switch places. It’s time they get to know and confront each of their estranged parents.

With an accidental assist from some fortuitous magic, Jamie arrives in New Jersey, looking to all the world like Siri, and Siri steps off her flight sporting a Jamie glamour.

The sisters unexpectedly find themselves stuck living in each other’s shoes. Soon Siri’s crushing on Jamie’s best friend Dawn. Jamie’s falling for the handsome New Yorker she keeps running into, Zarar. Alongside a parade of hijinks and budding romance, both girls work to navigate their broken family life and the stresses of impending adulthood.

So the first half of this book was painful. Jaime and Siri are so unlikeable, I considered DNFing this book multiple times. Now, I’m down for an unlikeable MC, but this was dramatically painful. Siri is an aggressive, uptight person with a superiority complex. And Jamie is ridiculously annoying and overbearingly “quirky”. Jaime gives me the “pick me girl” vibes and it’s not cute.

Honestly, the first 100 pages of this book were getting introduced to these characters, setting them up for this camp thing, the meeting, and all that jazz. I was not interested. It wasn’t until after they met and made their plan to switch places that I began to care at all for these characters.

This was going to be a 1 or 2 star review, but after they took each other’s places and the Freaky Friday body switch happened, then I got really interested in the plot. And somehow, their characters improved. Like, the beginning of this book versus the end is dramatically different, almost like it was meant to be two different books. The changes these characters went through were extensive and saved the entire story. Instead of being annoying, we also get to see Jaime as vulnerable and fearful. Siri loses her pretentious attitude and becomes more open minded and accepting. It was like a day and night difference.

Once I started enjoying this book, I started seeing all the things I liked about it. We have bisexual and disability representation through Siri. As well as interracial relationships for both Siri and Jaime. Therapy is mentioned in a positive light and we have anxiety rep, depression, and more mental health representation. But, even with all that goodness, this book has a lot of issues.

For one, Siri’s work around for cussing is SO FREAKING ANNOYING. And it’s not explained WHY she does this until the book is almost over! Like how hard is it to explain why she doesn’t curse and says these stupid substitutes like “excrement” or “intercourse”. I also had an issue that this book is being marketed as YA, but Siri is 18 almost 19, and Jaime is 20 and turns 21 in the book. Like, this is most definitely a New Adult novel and if it had been written a little more maturely, then an adult novel. Like these characters are renting apartments and working, which teenagers can do, but I’m not sure how relatable this is to a 15 year old picking up this book. It just felt like it was meant to be an adult novel but was “written down” for teenagers. It doesn’t sit right with me.

And while I loved Jaime’s journey to begin accepting people in her life and opening up, Zarar deserves so much better. As her main love interest, Zarar is strung along for days by Jaime and she’s honest about not wanting to date, but then agrees to date him. And then ghosts him. It’s clear he’s smitten with Jaime but lets her walk all over him until the end. I was getting so frustrated, because he was such a sweet and considerate character and partner. And Jaime all together is very cold and manipulative. This is discussed in the book, but it was kind of agonizing watching her push her loved ones out of her life to try and protect herself, while simultaneously hurting everyone around her.

And while Siri was awful to read in the beginning, I began to prefer her POVs after she arrives in California. The 180 degree switch was intense and much needed, but also surprising. I liked reading Jaime’s POVs originally but after she began to string Zarar along, and Siri got a personality makeover, I was done with Jaime.

I can’t even put into words how strange this book was. Like it was good, but not that good. I enjoyed most of what I read, but also hated certain parts and characters. There were good life lessons, but a lot of filler in between. I have to rate it three stars because it’s just so “eh”. I’ve seen a lot of people DNFing this book and not enjoying it, which is fair, but I don’t want to convey that its bad. It’s not – it’s just not great.

It’s funny, because after writing my review, I read Alexa’s and we basically have the same opinions on this book. While I don’t regret reading this, I just wish it was better. Alexa manages to convey some of my feelings better than I could, so be sure to check out her review for another perspective as well!

If you want a fun contemporary, check out Cool for the Summer by Dahlia Adlery or Glimpsed by G.F. Miller.

3 thoughts on “Review: Better Together”