Many years ago, when I was in middle school, I was obsessed with the Marked series. I loved the storyline and the world and while I never finished the series, I got 8 books in before I ran out of books and moved on with the series. When I saw P.C. Cast and Kristin Cast were writing a new series together, I was so excited! I was lucky enough to receive an ARC from the publisher and some swag as well! (pics below!)

Thank you to Wednesday Books for sending me an ARC of Spells Trouble in exchange for my honest review! This is a spoiler free, honest review and all thoughts and feelings are my own. 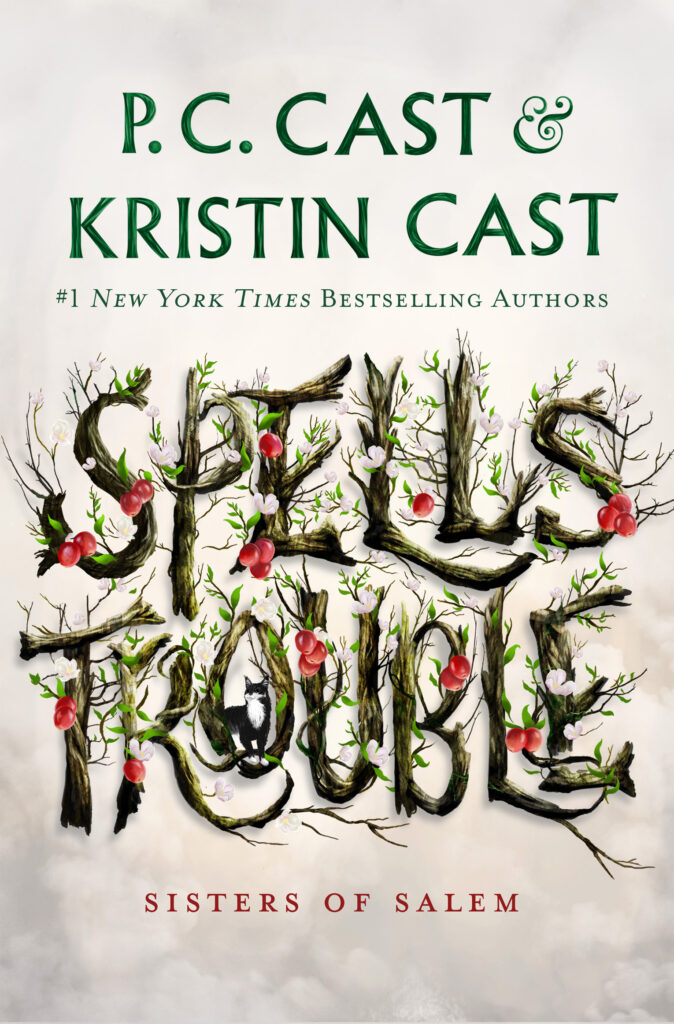 Hunter and Mercy Goode are twin witches, direct descendants of the founder of their town of Goodeville. As their ancestors have done before them, it is now time for the twins to learn what it means to be Gatekeepers–the protectors of the Gates to different underworlds, ancient portals between their world and realms where mythology rules and nightmares come to life.

When their mother becomes the first victim in a string of murders, the devastated sisters vow to avenge her death. But it will take more than magic to rein in the ancient mythological monsters who’ve infected their peaceful town.

Now Hunter and Mercy must come together and accept their destiny or risk being separated for good.

Spells Trouble was a great introduction to this new series. While it was a weird combination of things, I thought it was a great book to get us into the world of Mercy and Hunter and it got me excited for what’s coming next!

Honestly, I wasn’t sure what I thought about the writing for this book. It was hard to rate this because while I enjoyed the overall plot and thought the story was really interesting, but the writing was a bit weird. Like it was written as if for younger YA, like between 13-15, but some of the plot points were more mature, like 16+. Honestly, it was such a strange combination, so I might split this up into two sections.

Section one, the story. I loved the way this story was built up and the action introduced. We have twin sisters, Mercy and Hunter, who are witches. Their mother is finally letting them participate in the annual ceremony to strengthen the trees that act as protection for the town, named after their ancestors. But something goes horribly wrong and their mother is dead and the trees are weakened, letting a monster into their town. This book also includes a prologue which introduces Sarah Goode, who was a witch living in Salem. She managed to get away with her daughter Dorothy and founded Goodeville. The prologue was interesting, and it provided good backstory, but I don’t think it was necessary for this story. Unless it’s going to be brought back in future books. If so, then I’m glad we read it now, but for this story in particular, it was a nice addition, but not necessary for the overall storyline.

Hunter and Mercy, who are identical twins, were fun characters to follow around. While identical in appearance, they have vastly different personalities, interests, and even their sexuality. But the one thing these twins have are an intense sisterly love and connection. They seemed to be pretty accurate representations of twin teenage girls though there are times that the dialogue is kind of weird. Everyone kind of says everything they’re thinking or repeats themselves as if to make a point.

And this leads me to my biggest issue with the book: the actual writing. See, I thought the plot and the characters were interesting and pretty well written, but the actual writing and the dialogue was strange. It was almost oversimplified as if to be for a younger audience, but the context of the situation was for more mature readers.

For example, if I was having a conversation with Mercy about finding an object in the house it would probably sound like this:

“Hey Sammy, can you find me the toolbox in the upstairs cabinet?” Mercy called from the kitchen.

Mercy grabs the toolbox and pulls out the drill, attaching the drill bit. “Thank you so much for grabbing the toolbox upstairs! Ok, so I’m going to take this drill and drill a hole into the wall.”

“Ohh, so you’re going to drill a hole into the wall to hang up a picture? That’s so smart!”

This was the majority of the conversations. Or there would be strange nicknames or even their real names used over and over again. It was like the authors were writing a mature story for a younger audience, instead of teenagers. And it was such a repetitive thing happening and I wasn’t sure why the writing was like that. At times, it was even a bit distracting, because half the lines would be repeating the same thing or including this weird exchange of dialogue.

To wrap things up, I liked this book. It was good enough for 3.5 stars, but with the issues with the actual prose and dialogue, I had to drop it. Plus, the confusion of who this book is marketed too. Because the writing says pre-teens and young teenagers while some of the content says older teenagers and young adults. It’s a very weird mix and I’m not even sure who to recommend this too honestly.

One thought on “Review: Spells Trouble”