I’m just going to be blunt and honest: this book is a trainwreck. I have no idea where the author was going with this book and what she was trying to do, but it did not land well. Just … yikes.

Thank you to Wednesday Books for sending me an ARC for review on NetGalley. This is a spoiler free, honest review, and all thoughts and feelings are my own. 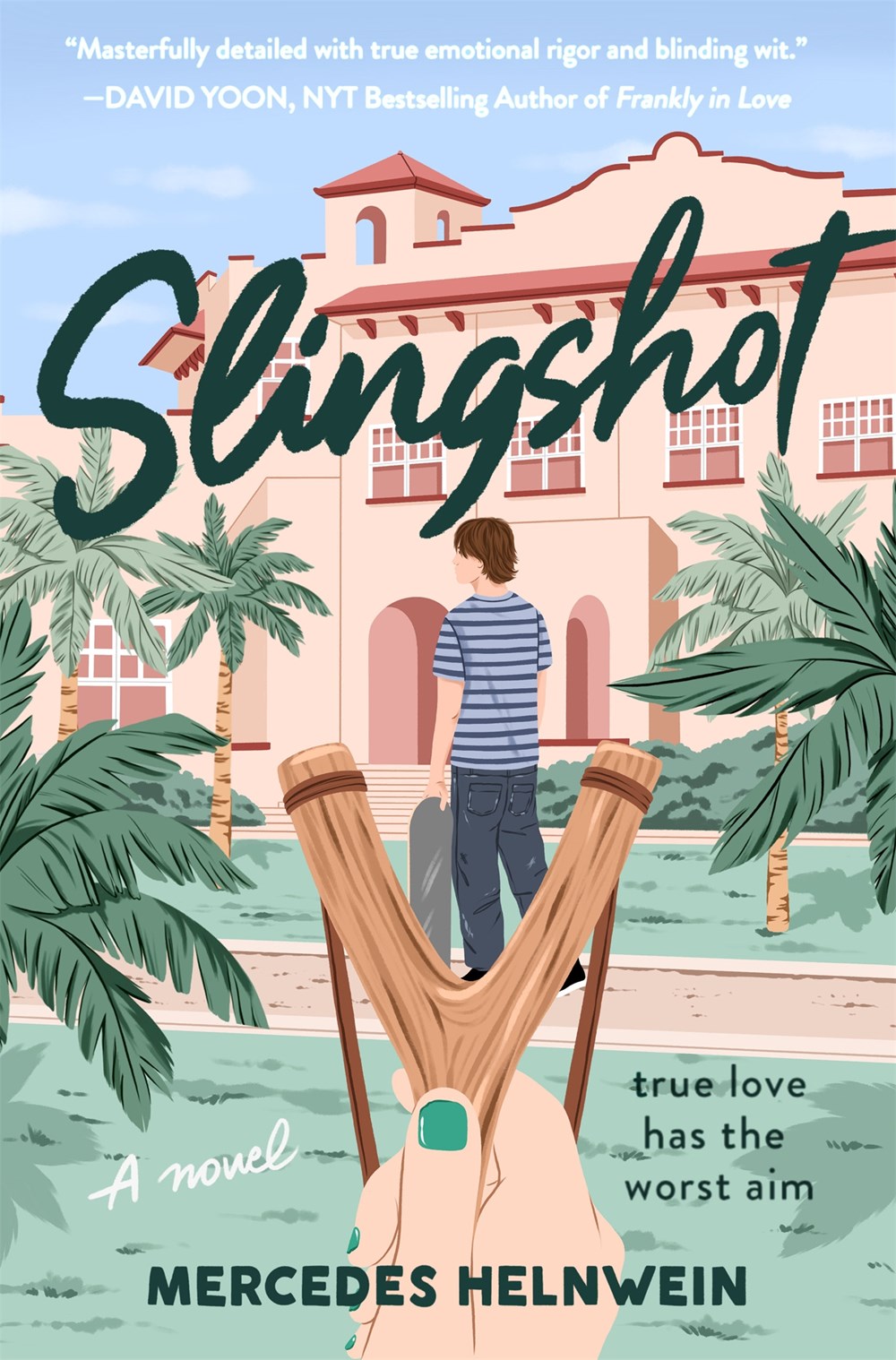 Grace Welles had resigned herself to the particular loneliness of being fifteen and stuck at a third-tier boarding school in the swamps of Florida, when she accidentally saves the new kid in her class from being beat up. With a single aim of a slingshot, the monotonous mathematics of her life are obliterated forever…because now there is this boy she never asked for. Wade Scholfield.

With Wade, Grace discovers a new way to exist. School rules are optional, life is bizarrely perfect, and conversations about wormholes can lead to make-out sessions that disrupt any logical stream of thoughts.

So why does Grace crush Wade’s heart into a million tiny pieces? And what are her options when she finally realizes that 1. The universe doesn’t revolve around her, and 2. Wade has been hiding a dark secret. Is Grace the only person unhinged enough to save him?

Acidly funny and compulsively readable, Mercedes Helnwein’s debut novel Slingshot is a story about two people finding each other and then screwing it all up. See also: soulmate, friendship, stupidity, sex, bad poetry, and all the indignities of being in love for the first time.

When Alexa over at Writing the Universe DNFed (did not finish) this book at 5%, I knew I had to read this. Sometimes, we have different opinions on books, like Wicked As You Wish, which I loved, but she didn’t. And sometimes, we completely agree. This is one of those books that we agreed upon.

After reading Alexa’s review, I went over to Goodreads to see what other opinions people had about this book, and most of them were not great. I was getting a little nervous and wasn’t sure what to expect, but what I read matched up with the reviews and I couldn’t get past 25%.

The first chapter, the very first chapter, is a 15 year old girl, Grace, talking about how she’s in love with her biology teacher and that she thinks he loves her back. Until he introduces his fiance to her and she gets her heartbroken.

Okay, wtf. Listen, I get it, crushes on teachers isn’t a completely taboo thing, so long as the crush is 100% with reality and there’s no further thoughts or actions taken on it. (Aka, the person can acknowledge having a crush on a teacher is not ok and they can move past any feelings and take no further claim or action.) But this, this was disturbing. The fact that Grace is obsessed with her teacher and acts as though they are truly in a relationship is so disgusting. And a little later on in the book we have another high school student encouraging her to go after him and make him know that she wants him. EW. Even as satire, this is still a terrible message to teenagers and children, and honestly this wasn’t written like satire. There was no hidden joke between the author and the reader, this was pure encouragement and that’s what seriously prompted me to put this book down.

And don’t get me started on the bullying. Our main character is definitely an anti-hero – she’s crass and rude, only going so far as to care for herself, and thinks that everyone is either a bitch, an asshole, or a loser. As a certified bitch my freshman year in high school, I could kind of relate to this girls thinking in terms of her not caring about making friends or wanting to do her own thing, but the fact that she condones bullying and actively uses it as her “protection” from other students, is downright shameful. And when Wade steps into the picture, she’s quit to brush him aside and put him down after he was nothing but nice and genuine with her.

This book shows the ugly side of high school and then says “this is totally fine and normal, there’s nothing that needs to be changed here”. The fact that the author is condoning this behaviour made me so uncomfortable and based on the reviews, it doesn’t get better. Grace never learns her lessons, she never has a realization on how she treats people, and it’s messed up.

Throw in the fact that Grace actively bullies her roommate, by loudly making fun of her interests, like her love for showtunes, is so wrong. And there’s even a scene where she steals her roommates headphones and then gets mad at her when her roommate asks for them back. And Grace does the same thing towards her mother. She is rude and mean to her mom unnecessarily and it shows that Grace’s bitterness is the only personality trait she seems to have. It’s like she was trying to make Grace this “I’m too cool” kind of person, but she ended up coming across like a bitch.

I don’t know what the author was going for, but this book was an absolute train wreck. Read at your own risk.

If you want a good high school romance, check out What’s Not To Love by Emily Wibberley and Austin Siegemund-Broka, which I’m currently reading and loving!