I won a copy of What Big Teeth from BookishFirst after reading a sneak preview on their site. The prologue and first chapter got me so excited for this book, but after reading it, it didn’t live up to my hopes.

Thank you to FSG and BookishFirst for sending me a finished copy for review. This is an honest, spoiler free review and all thoughts and feelings are my own. 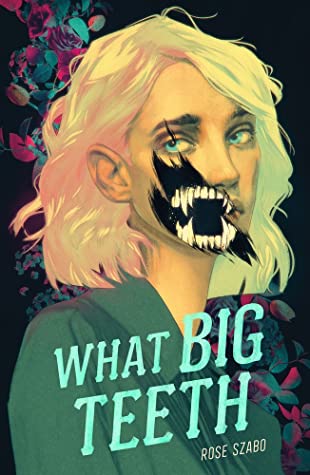 Rose Szabo’s thrilling debut What Big Teeth is a dark, gothic fantasy YA novel about a teen girl who returns home to her strange, wild family after years of estrangement, perfect for fans of Wilder Girls…

Eleanor Zarrin has been distanceed from her wild family for years. When she returns home after a violent incident at boarding school, trying to fit back into the space she left is harder than she thought. Eleanor is left to fend for herself within her family of monsters. But when a mysterious figure arrives at their family estate, she must find a way to overcome the monster invading her home or risk becoming a monster herself.

Exquisitely terrifying, beautiful, and savage, What Big Teeth is a genre-defying story from an exciting new literary voice.

Jumping in, I liked this book, but I didn’t love it. It was honestly kind of difficult getting through because the chapters are ridiculously long. In total there are fifteen chapters, which includes the prologue and epilogue.

Fifteen chapters. In a 400 page book.

Now, don’t get me wrong, I’m not someone who will avoid a book just because the chapters are long, but this was kind of a lot. Some chapters were almost 100 pages, which for a YA book, is a lot! I can understand an adult fantasy or science fiction novel having never-ending chapters, but for a 400 page YA book, why are the chapters so long?

I guess it makes it easy to say “just one more chapter!” if that chapter is 25% of the book…

Getting to the actual meat of the book, I liked the story. I thought it was a cool idea and while I’m not sure what fairy tale or legend this book was pulled from, I can tell it has its roots in another story. I love books that expand on a folktale or stories from someone’s nation or culture – but I can’t tell if that’s this kind of story. The author is Hungarian, so maybe it does! Either way, I thought it was a cool idea with interesting characters and I was here for it.

Until the book took a weird turn.

Now this is a spoiler free review, so I won’t say much, but once a certain character is introduced, things got weird. And maybe that was the intention, but it felt like it didn’t fit in the book. It felt random and then the author kept having to justify why this weird character is here and what’s going on, only to make a tangled web they had to unweave.

It wasn’t to my taste.

The characters were strange too, which I actually liked, and it made the book that much more interesting. Each character had some quirk to them, like Eleanor’s mother having to remain wet all the time, or her aunt Margaret who is mute and also vicious. Eleanor as a character was interesting and I liked her enough, but there were some moments that I was very uncomfortable.

We don’t know what time period this book is set in, only that occurs after “the war”, and after 1908 since we get that date from one of the characters. I assume this book is set in the forties or fifties? due to the lack of technology, no phone, no television, but they have telegraphs and gramophones in the home, but it’s never confirmed. What made me uncomfortable was Eleanor, a sixteen year old, lusting after a thirty or so year old man named Arthur, while her twenty-one year old sister is “dating” him.

It was kind of gross. Actually, it was really gross. I have never been a fan of having young girls fall in love with men twice their age and this made me feel really icky. We get some answers later as to what is going on with Arthur, but it was still disturbing to have all of the children falling in love with this man, even Eleanor’s young cousin Rhys was in love with this man.

It was really freaky.

I feel like this review is spiraling, kind of like this story. It was hard to keep track of what was going on, which made understanding the plot a bit difficult.

Getting to the point, I had some issues with this book. The chapters were ridiculously long, the plot felt like it got derailed, the weird love pentagon going on with the characters and Arthur was weird, and it just felt like this book was a miss for me. Again, I liked it, but I didn’t love it and these issues dropped my review down for me.

If you’re looking for a dark gothic, fantasy – be sure to check out Wilder Girls by Rory Power!

One thought on “Review: What Big Teeth”