Every so often I go on my kindle and cry at how many free books i’ve downloaded, whether through NetGalley or Amazon sales, that I haven’t read! Plus all the ones that I did pay for and also haven’t read.

Someone needs to take my credit card away from me because I clearly have no self control. I guess the only thing I can do is expose myself as the addict I am – so let’s explore my kindle TBR!

This book has been sitting in my queue for several months now and I haven’t had the time to read it yet! It sounded so good when I requested it, so even though I didn’t have the time to read it immediately, I asked for it anyways. Hopefully I can read it soon!

The mage-marked granddaughter of a ruler of Vaskandar, Ryx was destined for power and prestige at the top of Vaskandran society. But her magic is broken; all she can do is uncontrollably drain the life from everything she touches, and Vaskandar has no place for a mage with unusable powers.

Then, one night, two terrible accidents befall her: Ryx accidentally kills a visiting dignitary in self-defense, activating a mysterious magical artifact sealed in an ancient tower in the heart of her family’s castle.

Ryx flees, seeking a solution to her deadly magic. She falls in with a group of unlikely magical experts investigating the disturbance in Vaskandar—and Ryx realizes that her family is in danger and her domain is at stake. She and her new colleagues must return to the family stronghold to take control of the artifact that everyone wants to claim—before it destroys the world. 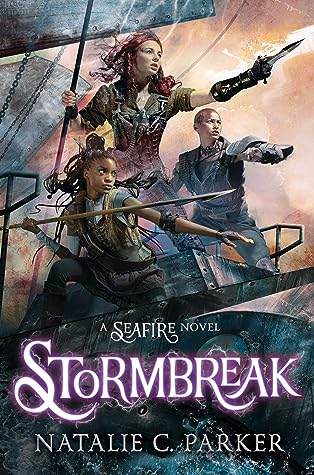 I received an ARC of this book through NetGalley several months ago and just – haven’t read it yet. In that time, I’ve thought about picking it up and reading it but again – time. Time is my enemy as I contract myself to read other books first or hit slumps and can’t bring myself to read anything. I just saw the publication date was pushed back too so this may go back on the TBR for a bit longer.

In this epic conclusion to the Seafire trilogy, which Booklist called “Mad Max by way of Davy Jones,” Caledonia Styx will risk everything–her heart, her crew, and even her life–to defeat Lir and take back the Bullet Seas once and for all.

Aric Athair is dead. But the fight for the Bullet Seas is far from over. Caledonia’s nemesis, Lir–the one responsible for getting her parents killed and for turning her brother into a Bullet–has seized control of the warlord’s army.

Caledonia and her crew have fled to Cloudbreak to prepare for an all-out war. And they are not the only ones. Defecting soldiers begin to show up in droves to join their fight. But just as it seems like the tides might be turning, a surprise attack decimates the growing rebellion.

Desperate, with much of her crew missing or worse, Caledonia is forced to make an unlikely and unsteady alliance with a new enemy. It’s a gamble that could cost her everything, but with the fate of the seas in her hands, Caledonia will do whatever it takes. War has come, and it’s time to sink or swim.

*Sigh* Another case of “requested it but became too busy reading other books to get to this one, so it went further down on the TBR”. I really want to read this book, I just don’t think I have the time! Ugh!

For Malik, the Solstasia festival is a chance to escape his war-stricken home and start a new life with his sisters in the prosperous desert city of Ziran. But when a vengeful spirit abducts Malik’s younger sister, Nadia, as payment into the city, Malik strikes a fatal deal—kill Karina, Crown Princess of Ziran, for Nadia’s freedom.

But Karina has deadly aspirations of her own. Her mother, the Sultana, has been assassinated; her court threatens mutiny; and Solstasia looms like a knife over her neck. Grief-stricken, Karina decides to resurrect her mother through ancient magic . . . requiring the beating heart of a king. And she knows just how to obtain one: by offering her hand in marriage to the victor of the Solstasia competition.

When Malik rigs his way into the contest, they are set on a course to destroy each other. But as attraction flares between them and ancient evils stir, will they be able to see their tasks to the death?

The first in an fantasy duology inspired by West African folklore in which a grieving crown princess and a desperate refugee find themselves on a collision course to murder each other despite their growing attraction.

I got this book on release day and was going to dive in, then book tours started happening. I follow one of the authors on TikTok and got so hyped about this book that I’m sad I haven’t gotten a chance to read it yet.

Ash is descended from a long line of gladiators, and she knows the brutal nature of war firsthand. But after her mother dies in an arena, she vows to avenge her by overthrowing her fire god, whose temper has stripped her country of its resources.

Madoc grew up fighting on the streets to pay his family’s taxes. But he hides a dangerous secret: he doesn’t have the earth god’s powers like his opponents. His elemental gift is something else—something that hasn’t been seen in centuries.

When an attempted revenge plot goes dangerously wrong, Ash inadvertently throws the fire and earth gods into a conflict that can only be settled by deadly, lavish gladiator games. The fights put Madoc in Ash’s path, and she realizes that his powers are the weapon her rebellion needs—but Madoc won’t jeopardize his family, regardless of how intrigued he is by the beautiful warrior.

But when the gods force Madoc’s hand, he and Ash uncover an ancient war that will threaten more than one immortal—it will unravel the world. 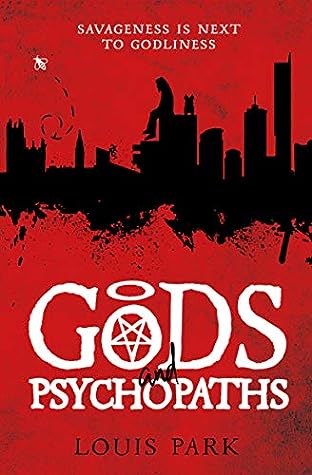 I’ve had this book sitting in the cue for almost a year now. It was from this review site, kind of like NetGalley, except you don’t need to be approved for them. You request any book you want and then have to review within 90 days . . . which obviously didn’t happen for me. I’m still really interested in this book, but who knows when I’ll get the chance to read it.

Like most omnipotent beings, Little Dog finds boredom a constant problem, but the deity has just the right plaything to solve this, a psychopathic and eccentric vagabond called Cain.

Cain never wanted to make a deal with the sadistic and petulant deity. All he ever wanted was to gorge on Manchester’s finest foods, fight the police and save the bumblebee through murderous rampages. Instead, he has to give bloodthirsty performance after bloodthirsty performance to keep the deity entertained. If he fails, he might just find that he － and the rest of the world － become Little Dog’s snacks.

**If you like your violence gory, your heroes twisted, your sex messed up, and your comedy as black as your ex’s heart, then this is the book for you!**

This was a free download I got from Amazon I believe, honestly who knows, and it’s another case of no time to read! This cute rom-com has been shoved in my hands so many times by different people that I know I’ll like it if I read it, but TIME. Seriously, who said sleep was necessary? Or that a day was only 24 hours? I NEED MORE TIME.

A fresh, irresistible rom-com from debut author Emma Lord about the chances we take, the paths life can lead us on, and how love can be found in the opposite place you expected.

Enter Jack, class clown and constant thorn in Pepper’s side. When he isn’t trying to duck out of his obscenely popular twin’s shadow, he’s busy working in his family’s deli. His relationship with the business that holds his future might be love/hate, but when Big League Burger steals his grandma’s iconic grilled cheese recipe, he’ll do whatever it takes to take them down, one tweet at a time.

All’s fair in love and cheese ― that is, until Pepper and Jack’s spat turns into a viral Twitter war. Little do they know, while they’re publicly duking it out with snarky memes and retweet battles, they’re also falling for each other in real life ― on an anonymous chat app Jack built.

As their relationship deepens and their online shenanigans escalate ― people on the internet are shipping them?? ― their battle gets more and more personal, until even these two rivals can’t ignore they were destined for the most unexpected, awkward, all-the-feels romance that neither of them expected.

This is just some of the books on my kindle TBR that I still haven’t read. Although, I think the read vs. unread is a little skewed because sometimes I get an eARC or e-copy of a book and then end up reading a physical copy, whether an ARC or FC, so it says unread but I’ve definitely read it. I have no idea how many books on there are marked unread but they have been read.

Regardless, here are some books from my kindle TBR that I really need to read but just haven’t yet. What are some books you’ve been holding off reading? Is it from time, other commitments, just not in the mood, other??