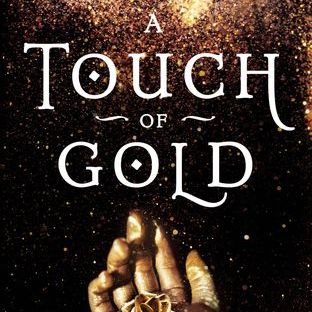 I’ve been in this awful habit of requesting sequels I have the first book for and just haven’t read. It’s such a bad habit that it’s caused me to have more than 20 eARCs I had to read and simply not enough time. Which is why I’m basically bingeing off all the upcoming September and October reads right now. I’m overwhelmed!

I received an eARC of A Curse of Gold by Annie Sullivan through NetGalley from one of these requests. I owned the ebook of A Touch of Gold, so thankfully it wasn’t too much of a panic to receive book 2, but I was still panicking a little.

King Midas once had the ability to turn all he touched into gold. But after his gift—or curse—almost killed his daughter, Midas relinquished The Touch forever. Ten years later, Princess Kora still bears the consequences of her father’s wish: her skin shines golden, rumors follow her everywhere she goes, and she harbors secret powers that are getting harder to hide.

Kora spends her days locked in the palace, concealed behind gloves and veils, trying to ignore the stares and gossip of courtiers. It isn’t until a charming young duke arrives that Kora realizes there may be someone out there who doesn’t fear her or her curse. But their courtship is disrupted when a thief steals precious items from the kingdom, leaving the treasury depleted and King Midas vulnerable. Thanks to her unique ability to sense gold, Kora is the only one who can track the thief down. As she sails off on her quest, Kora learns that not everything is what it seems—not thieves, not pirates, and not even curses. She quickly discovers that gold—and the power it brings—is more dangerous than she’d ever believed.

Midas learned his lesson at a price. What will Kora’s journey cost?

I have been looking forward to reading this book for a while, so I was happy to get started once I received A Curse of Gold! My friend Alexa has already read both Touch of Gold and Curse of Gold, and she loved the books. This was a quick read for me as I happily curled up on my couch and read the book in one day.

First off, I really appreciated the prologue to this story as it went over the original tale of King Midas and then added onto it. It not only helped me get into the story faster than if we just jumped in, but also reminded me of the tale and how it went. I appreciate authors taking the time to include the backstory to their works, if they can fit it. Makes it much easier for me to get absorbed into the story!

Once we’ve jumped in, I found myself interested and curious from the start. I wondered how the thief was going to steal the gold and what would push her out of the palace. Plus, in what way would they be traveling to return the stolen goods? Traveling is very important in fairytales – sets the tone for what is to come.

I knew the second we met this one character that they were bad news. I had such a strong gut feeling (probably because I read too many betrayal stories) that this person was going to be such a lying, conniving jerk. And of course the people we meet later, who aren’t as so nice upfront, are actually the sweetest people ever!

I really like how the characters were presented in this story. Even though we have some strong tropes in here, this story kind of reminded me of a mix of Frozen and Tangled, personality wise. We get goofy twins who remind me of Olaf, a cousin who tags along like Anna, a man unwilling to help at first then convinced aka Kristoff. Of course the Tangled vibes come into play later, but seriously, this book in personality feels like a mash of those two movies, it’s scary accurate. But in a good way.

What those movies don’t have are privateers helping a princess return her fathers gold. I thought the personality of the book, the plot, and the writing made this such a fun read for me. I liked most of the characters, Kora’s self journey, the other character’s self journey, and the actual events that occur! It was such a fun story, I’m really excited to read A Curse of Gold!

If you like retellings, curses, and enemies to friends to lovers romance, you are going to love this book. I really did. This book was a

If you didn’t see, I created a Ko-fi account! I’m not expecting anything to come from it, but if you like my content and want to me get my own domain and host bookish giveaways, I’ve linked it here! Thanks to anyone who checks it out!

If this book sounds interesting, check out Girl, Serpent, Thorn by Melissa Bashardoust or Thorn by Intisar Khanani!

4 thoughts on “Review: A Touch of Gold”