I received a copy of The Whitsun Daughters by Carrie Mesrobian from Penguin Teen in exchange for an honest review.

So my initial read of the description got me really excited! Until I got to the ending. There were so many good things in this book and then it ultimately flopped for me. There will be some spoilers in this review, but I have marked them in case you want to remain spoiler free. 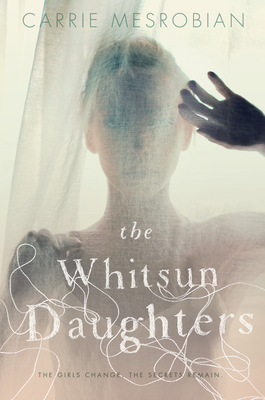 “How quickly everything in the world disintegrates. Everything but the loneliness of young women.”

So begins The Whitsun Daughters, a story of three contemporary teenage girls–sisters and cousins–in a small Midwestern town, narrated by the ghost of a young woman who, over a century earlier, lived and loved on the same small patch of farmland the girls now call home.

The book follows both the present-day story of the three Whitsun girls and the story of Jane Murphy a century earlier as they fight to assert their own desires in worlds determined to ignore and minimize them. The Whitsun girls struggle with an unplanned pregnancy. Jane is determined to defy her arranged marriage and have both the baby she carries and the young man she loves.

The Whitsun Daughters leaves readers with a profound sense of the unbreakable thread connecting generations of young women who sought and continue to seek control their destinies.

At first, I really liked this book! I loved the alternating POVs, with one person being in first person and the other in third person, it really solidified the vibe of someone watching them. I also thought it was cool to go back and forth between past and present to see how life progresses. I thought the writing was really good and the tonal change from past to present was also well done.

The characters were all interesting, although I didn’t get much time to get to know Violet or Carna. Daisy was a sweet character, but I was worried for her. Watching her pine after Hugh, her cousin’s ex-boyfriend, was sad. Especially since he is 19 and she is 15. The age gap was really concerning for me – and then we get a revelation and I was disturbed.

Poppy was fierce, if not sometimes a jerk, and her personality was very different from Daisy or Lilah. Lilah is the more spiritual child, taking after Violet, as she wants to be carefree and one with the world. Meanwhile Daisy just wants to be her own person. Lilah gets all the attention from Violet and Carna, Poppy is fiercely independent and just wants to get out, and Daisy is just there. Maybe that’s why she starts acting out.

This book talks about periods, sex, and other topics that directly relate to women. Because this is written from two POVs, we see Jane, who was forced to leave her home in Ireland and come to America and marry a man, resist her marriage and try to be with the man she really love. Daisy wants the affirmation and attention from Hugh, her sister’s ex-boyfriend, who she really likes. While there were some really good things that this book discusses, it takes a serious turn by the end.

Before the last 25% of this book, I probably would have rated this book higher. But after a certain reveal about two characters, it really grossed me out. Then we also add on the age gap between Daisy and Hugh, which is gross. And the writing itself got harder to understand. By the end of the book, I wasn’t sure what had actually happened, but if my understanding is correct, it’s really gross. And sad. So I have to drop my score due to an almost promotion of some concerning ideals, plus the fact that the storyteller became so cryptic I couldn’t even understand what was going on anymore. I was left confused with a lot of additional questions.

So the concerning topic I was not only confused, but worried about, was the accusation and hint that Hugh and Poppy are half siblings. Daisy, who is Poppy’s first cousin, effectively slept with her cousin who is also 19. While I’m all for taking back sex and being free, a 15 year old sleeping with a 19 year old, who is not only Poppy’s ex, but potentially her brother, is really gross. And it really disturbed me. Plus, the fact that the book ends with our ghost somewhat confirming this allegation, but being so incoherent with it it’s hard to tell, was off putting. I really enjoyed the book and the original message, but the ending was so off putting it ruined the book for me.

For Jane, we see her thrown into a mental hospital after giving birth to her son and breaking her leg. She had tried running away to the witch who lives in the forest, but didn’t even come close by the time she fell and broke her leg. What I don’t understand is why she was thrown in a mental hospital? And, we know she dies, but we don’t actually know when. We just get to know she starts watching her son live his life and she watches him die.

I don’t actually understand anything about her being a ghost. The ending is just not written clearly enough to really get the reader to understand what is going on.

Overall, I wanted to like this book, I really did. But with all the problems that it had for me, I can’t rate this higher than

If you’re looking for a ghostly historical fiction novel, check out Anna Dressed in Blood by Kendare Blake.