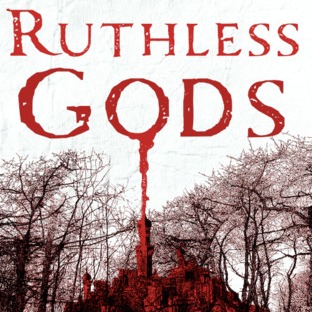 Spoiler warning: If you have not read the first book in the series, Wicked Saints by Emily A. Duncan, then I cannot guarantee this will be a spoiler free review. If you have read Wicked Saints, this review will not spoil Ruthless Gods.

I am torn. On the one hand, this took me forever to read because I knew this would probably hurt me, so I didn’t want to finish it. The other part of me is mad I put it off and should have just finished sooner. Not sure which side will win the argument, but the fact is I took months to finish this book and the ending almost killed me, so here we are: writing this review in anger and resentment. Enjoy!

Nadya doesn’t trust her magic anymore. Serefin is fighting off a voice in his head that doesn’t belong to him. Malachiasz is at war with who–and what–he’s become.

As their group is continually torn apart, the girl, the prince, and the monster find their fates irrevocably intertwined. They’re pieces on a board, being orchestrated by someone… or something. The voices that Serefin hears in the darkness, the ones that Nadya believes are her gods, the ones that Malachiasz is desperate to meet—those voices want a stake in the world, and they refuse to stay quiet any longer.

So to be clear, I read the ARC of this book. Now that the finished copy is out, even though ARCs are basically final drafts, there are some editorial changes that can occur, meaning some things may be different. For the most part though, we should all be on the same page, though I’m not going to go into detail as this is a spoiler free review.

Let’s start off this review with the obvious: Emily wants to murder her readers. The emotional rollercoaster that was Ruthless Gods not only gave me several heart attacks while reading, but almost slew me at the end. Wicked Saints was a journey of its own because of the new characters we meet and grow to like – and then hate to love. Now we have characters undergoing big changes and it’s hard to watch your favorites change before your eyes.

Then theres also the fact that the previous book ended with attempted and actual murder.

My journey with this book was difficult. I often have a conflict with books I like: one part of me feels starved and needs to read it, the other is terrified of rushing through the book. I want to know what comes next without the aspect of finishing the book. Once the book is finished, there’s no more – until the next one comes out.

I have had a long time to reflect on this review because the emotions were high for me when I finished, but I’m going to be honest. It does suffer from middle book syndrome.

Now before anyone raises their pitch forks and torches, let’s remind ourselves what middle book syndrome is. It is essentially the idea that the middle book is a sort of filler between the events of book 1 and book 3 or books whatever, depending on how many books there are. Since this series is a trilogy, it’s books 1 and book 3. Now, I say this because the entire first half of the book I felt like I was going nowhere.

Nothing really happened. Why? Because we had to recoup from the ending of book 1, set up the driving force for book 2, and make sure that the momentum takes us into book 3. Middle book syndrome is not necessarily a bad thing, it can be a good thing, but it does mean that the book can lag. And Ruthless Gods lagged in the beginning.

But once the action started – OH MY GOSH. The last two hundred pages grabbed the collar of my shirt and dragged me along, whether I wanted to go or not.

So besides the apparent middle book syndrome, and character changes, what else is there. Well, nothing bad. I loved the driving force in this book and the chain of events that seemed inevitable, but really weren’t. One thing I did have to pick a fight on is Nadya. Sweet, stupid Nadya. Her actions and her decision making irritated the shit out of me. I wanted to smack her upside the head and scream at her. Now, I get the motivation behind it, but come on! So many bad choices were made and now I’m left to suffer because of it?

Why are you making me suffer?!

To wrap up my convoluted thoughts I really liked this book. Now don’t act all surprised because of what I said earlier. I was mad. Even with the lag at the beginning, once the plot gets going, you won’t be disappointed. I threw the book and was SCREAMING at the end, so that should tell you the mindset I am coming from as I write this. Just like with Wicked Saints, this book is a

// 5 stars for me. If you haven’t read Wicked Saints yet, get on it. It’s a fantastic series!

If this book sounds interesting to you, be sure to check out Shadow and Bone by Leigh Bardugo, Cruel Prince by Holly Black, or Serpent & Dove by Shelby Mahurin.