I received an advance copy of This Book Is Not Yet Rated by Peter Bognanni from a giveaway on Goodreads. The book is available on April 9, 2019 so only two more months! 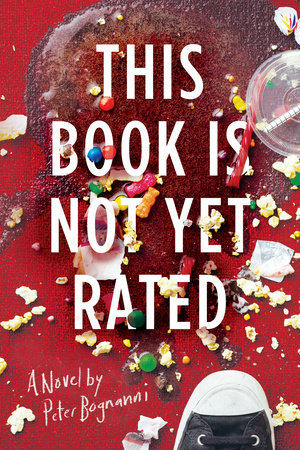 A smart and funny contemporary YA novel about 17-year-old Ethan who works at the crumbling Green Street Cinema and has to learn, along with his eccentric, dysfunctional work family, that fighting for the thing you love doesn’t always turn out like in the movies.

The Green Street Cinema has always been a sanctuary for Ethan. Maybe it’s because movies help him make sense of real life, or maybe it’s because the cinema is the one place he can go to still feel close to his dad, a film professor who died three years ago. Either way, it’s a place worth fighting for, especially when developers threaten to tear it down to build a luxury condos.

They say it’s structurally unsound and riddled with health code violations. They clearly don’t understand that the crumbling columns and even Brando, the giant rat with a taste for sour patch kids, are a part of the fabric of this place that holds together the misfits and the dreamers of the changing neighborhood the cinema house has served for so many years.

Now it’s up to the employees of the Green Street Cinema–Sweet Lou the organist with a penchant for not-so-sweet language; Anjo the projectionist, nicknamed the Oracle for her opaque-but-always-true proclamations; Griffin and Lucas who work the concessions, if they work at all; and Ethan, known as “Wendy,” the leader of these Lost Boys–to save the place they love.

It’s going to take a movie miracle if the Green Street is going to have a happy ending. And when Raina, Ethan’s oldest friend (and possible soul mate?), comes back home from Hollywood where she’s been starring in B-movies about time-traveling cats, Ethan thinks that miracle just may have been delivered. But life and love aren’t always like the movies. And when the employees of the Green Street ask what happens in the end to the Lost Boys, Ethan has to share three words he’s not been ready to say: “they grow up.”

This Book Is Not Yet Rated is the story of growing up and letting go and learning that love can come in many different forms and from many different sources like the places that shape us, the people who raise us, the lovers who leave us, and even the heroic rodents who were once our mortal enemies.

Going into this story, I wasn’t sure what to expect. Let me say that I was blown away by how deep this story was. The author discusses serious topics such as death, identity, self worth, and finding our place in this world – something I didn’t expect to be hit with. It was a pleasant surprise, but a surprise nonetheless.

The beginning was a bit boring for me and I had a bit of trouble getting into it, but once I was invested, it was an engaging story. I did have an issue connecting with the main character though, although I’m not sure what about him made him distant for me. His personality seemed odd, but it makes sense as the story progresses why it might come across that way, so I’ll excuse it.

The biggest issue I had with the story in general was the relationship between Ethan and Raina. It was a weird love story between them that I’m not sure was resolved, which was irritating because I felt so much of the book was Ethan avoiding his feelings for Raina and once he accepted them, the tension dissipated and I’m left with nothing. I wanted more out of this love story between them and I felt a bit disappointed in it. Besides that, the interaction between Ethan and Raina were a mix of sad and emotional to fun and light hearted – it was a good, realistic mix.

Besides that, the story is engaging, funny, and deep. The other characters, like Anjo, Sweet Lou, Griffin, and Lucas helped lighten up the story and make it more entertaining and less emotionally scarring, especially in regards to the fact that this theater is going to be torn down. I also think Ethan’s friendship between these characters helped make him seem less lonely and whiny, like he does with Raina at times, and makes him appear more like a normal teenager.

Overall, I enjoyed this book and it was a good, fast read. I’m excited to read the finished result in April! For my rating, I would rate this book a

/5 stars. It was a good contemporary read and I would definitely recommend it!

If you like this book, I would recommend To All The Boys I’ve Loved Before by Jenny Han

2 thoughts on “This Book Is Not Yet Rated”