City of Ghosts by Victoria (V.E.) Schwab debuts in August 28, 2018. We both received this ARC at BookCon as part of a three pack for the Epic Reads event. Personally, I am not a giant fan of middle grade books, but stop the presses! This book was so good and so cute! 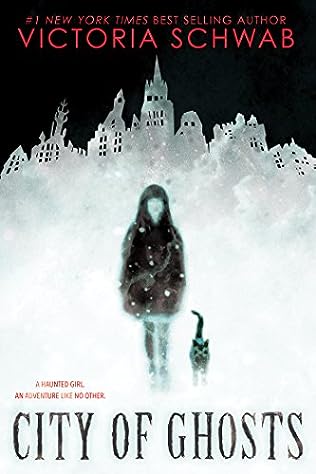 Here is the full synopsis from Goodreads:

Cassidy Blake’s parents are The Inspectres, a (somewhat inept) ghost-hunting team. But Cass herself can REALLY see ghosts. In fact, her best friend, Jacob, just happens to be one.

When The Inspectres head to ultra-haunted Edinburgh, Scotland, for their new TV show, Cass—and Jacob—come along. In Scotland, Cass is surrounded by ghosts, not all of them friendly. Then she meets Lara, a girl who can also see the dead. But Lara tells Cassidy that as an In-betweener, their job is to send ghosts permanently beyond the Veil. Cass isn’t sure about her new mission, but she does know the sinister Red Raven haunting the city doesn’t belong in her world. Cassidy’s powers will draw her into an epic fight that stretches through the worlds of the living and the dead, in order to save herself.

Going into this story I was excited, because I adore Victoria Schwab, but also nervous. As a not-so-big fan of middle grade, I was scared this book would be dull, boring, or too easy. On the contrary, this book was fun, exciting, witty, and action packed. While the language was dumbed down (obviously!) it was such a fun and enticing read.

My favorite thing about ALL of Schwab’s books are her amazing characters. Cass and Jacob are complex and three dimensional throughout the entire novel. Their choices reflect who they are as people instead of what the author or readers want. I think that Schwab’s use of realistic characters (even the side characters) not only make this book easy and fun to read, but also scary. This ghost story does include actual ghosts (shocker) and the humanity in each of those ghost scenes sometimes make it less scary, and sometimes terrifying.

Another thing I loved about this book was the strong detailed descriptions of what is going on around Cass and where she is. I never felt like the screen in my brain went dark because Schwab keeps it lit with her avid and, sometimes, scary descriptions. I loved reading scenes just of Cass’ surroundings because even that is interesting and I loved viewing Scotland through her lens.

The plot of this story was also adorable! Being a middle grade, I thought this book was actually scary. If I were a elementary or middle schooler reading this now, I might need to leave the lights on for a few weeks (I’m also just a giant scaredy cat!). I think this book is a perfect intro to supernatural, horror, and other spooky subjects for kids and does so without scarying them half to death (cough cough Scary Stories to Tell in the Dark cough cough!).

The only problem I had with this book was that I felt it ended too early! I wanted to hear more about Cass and Jacob’s adventures and see more of Edinburgh, Scotland! Thankfully, Schwab has confirmed book two, and it appears it takes place in Paris!

Overall, I would give this book

If you liked this review or this book sounds interesting, I would check out either Coraline or The Graveyard Book by Neil Gaiman! Both are middle grade scary/suspense novels by another amazing author!

8 thoughts on “City of Ghosts”